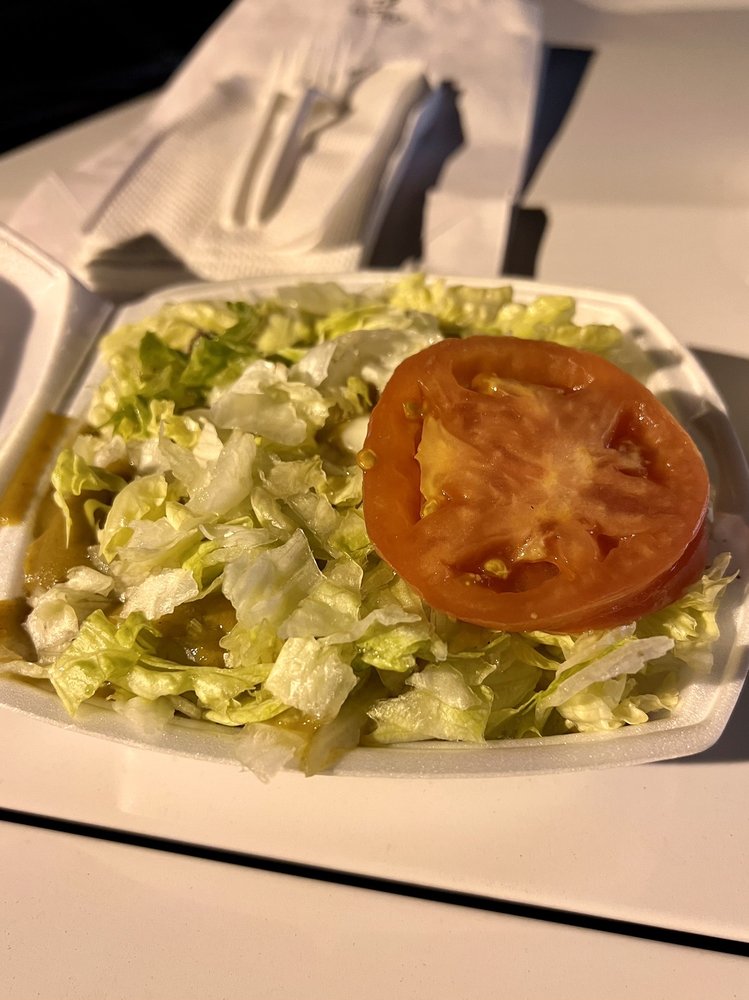 The stretch of Interstate 40 between Amarillo, Texas, and Albuquerque, New Mexico, is fairly desolate. Aside from roadside truck stops and the occasional fast food chain, there’s not much to see or do along this 280-mile open road, but just a few miles off I-40 is an opportunity to cruise through one of Route 66’s most iconic towns: Tucumcari, New Mexico.

The town of Vega sits right on historic Route 66 and has several landmarks worth stopping for. Also worth checking out are Dot’s Mini Museum, Rooster's Mexican Restaurant & Cantina, the Hickory Inn Cafe, Bonanza Motel, Vega Motel (built in 1947), and a restored Magnolia service station. As one of the sunniest places in the U.S., Vega is sometimes referred to as the “Solar Capital of Texas.”

The abandoned, vintage Magnolia Gas Station makes for a great photo op, particularly as the sun is setting.

Vega is home to Roosters, a small-town Mexican cantina easily accessed from I-40. Try the steak enchilada and fried ice cream.

Hickory Inn Cafe is an adorable spot in Vega, perfect for photos. Out front is a truck that looks like Mater from Cars, complete with a cow in the back. Stop in, grab an iced tea, and learn about the history of Vega.

Once you reach Adrian, pat yourself on the back: You've made it to the midpoint of Route 66. You'll know you've arrived once you see the MidPoint Cafe, a vintage-style roadside diner with lots of photo ops to commemorate your journey down (half of) the Mother Road. The restaurant and gift shop claims to be located at the geographic midpoint between Los Angeles and Chicago.

Once a bustling desert oasis built on the state line between Texas and New Mexico, today Glenrio is a ghost town. But just because the town is abandoned doesn’t mean it’s irrelevant. The Glenrio Historic District is listed on the National Register of Historic Places. It also has a place in pop culture: A scene for the film adaptation of The Grapes of Wrath was filmed here, and in the animated movie Cars, an abandoned "Glenn Rio Motel" is turned into a racing museum.

The next-level Russell’s Travel Center is located right on Historic Route 66 and has everything a road traveler could possibly want, including an onsite grocery store, a retro diner, a classic car museum, showers, and even a chapel.

If you need a break from driving, Ute Lake State Park in Logan features many miles of shoreline (the lake itself is 13 miles long), RV sites, and a campground where you can sleep under the stars. It’s a peaceful spot to recharge before getting your kicks in Tucumcari.

Tucumcari is an iconic Route 66 town—full of retro signage, abandoned motels, and classic diners—that's actively fighting to make a comeback. Tucumcari has a unique and fascinating history filled with tales of Native American settlements, notorious train robberies, and rowdy railroad construction workers so prone to pulling pistols on each other that the area was nicknamed “Six Shooter Siding” before getting its current name in 1901. A few years later, plans for the Mother Road began, and according to local history buffs, the town prepared itself for some of the route’s earliest alignments by building up its downtown accordingly. The result? Tucumcari’s downtown is separated from Route 66, where most of its kitschy motels and shops are still located today.

As larger highways took over, the town was largely left behind, and examples of Tucumcari’s struggles began to pop up everywhere. Many shops and motels closed their doors, but hope for a revival was not lost. Spending a day in Tucumcari means stepping back in time to Route 66’s glory days.

If you find yourself in need of sustenance while exploring Tucumcari, there's no better place to get a good meal than Del's Restaurant. It's got history; a friendly, small-town atmosphere; classic, home-cooked specials; and the iconic retro signage you want from a joint in Tucumcari. If you're feeling hungry, try the chicken-fried steak or a ribeye. The enchiladas offer a real taste of New Mexico. Wash it all down with a prickly pear margarita.

For an authentic Route 66 diner experience, pull into Kix on 66, where you’ll find chrome tables and classic diner grub. This place is so authentically ‘50s that it's regularly used as the setting for pinup photo shoots.

One of the last remaining curio shops in Tucumcari, Tee Pee Curios is not only awesome from the outside, but the inside is packed with all the Route 66 souvenirs, pottery, shirts, and jewelry you could ever want. Stop by after dark to check out the beautiful neon sign, one of only a few along this stretch that still lights up at night.

The iconic Blue Swallow Motel in Tucumcari has been open since 1939. As far as vintage neon signage goes, it doesn't get much better than the Blue Swallow's classic sign. If you can, stick around until dusk, it’s worth the wait. And there’s a reason for the classic “Tucumcari Tonite!” campaign—there’s no better place to stop for the night. Many rooms at the Blue Swallow come with their own garage, so you can stow your car, grab a lawn chair, and sit outside to bask in the glow of the iconic neon.

Motel Safari is a fantastic motel oozing with retro charm. It’s been a veritable Route 66 icon for more than 60 years. Built in 1959 by Chester Dohrer, the Googie design of the motel is quite fabulous. Architecture buffs will love discovering the many details, from the excellent signage to the counter-stacked brick grids in the facade. The current owners are diehard Route 66 enthusiasts, and they’re more than happy to share a beer on the patio and tell you all about Tucumcari.

The Tucumcari Historical Museum is a fantastic place to learn all about the town’s history. Housed in a 1903 schoolhouse, the museum features several themed rooms and outdoor exhibits.

If you’re more into prehistoric history, stop at the 10,000-square-foot Dinosaur Museum located in the Exhibit Hall of Mesalands Community College. The museum, which focuses on the Mesozoic period, is full of fossils and replicas, including a 40-foot-long Torvosaurus skeleton.

The Caravan Bar & Grill, located at the Tristar Inn Xpress, is renowned as one of the best bars in Tucumcari. Locals and tourists alike flock here after a long day. The bartenders may not know your name when you walk in, but by night’s end chances are good that you’ll have made a new friend.

You’re more than halfway through the Mother Road, but don’t get nostalgic just yet—there’s still plenty left to see on your way into Arizona. The trading posts—and opportunities to buy moccasins—will become more frequent as you head further into the desert Southwest. Grants and Gallup, New Mexico, and Holbrook, Arizona, are all historic towns still full of top-notch neon and whimsical motels, so take your time and enjoy the dry air and colorful sunsets. Keep an eye out for black rocks that line the road between Grants and Gallup—this part of the route follows the Zuni-Bandera Volcanic Field.