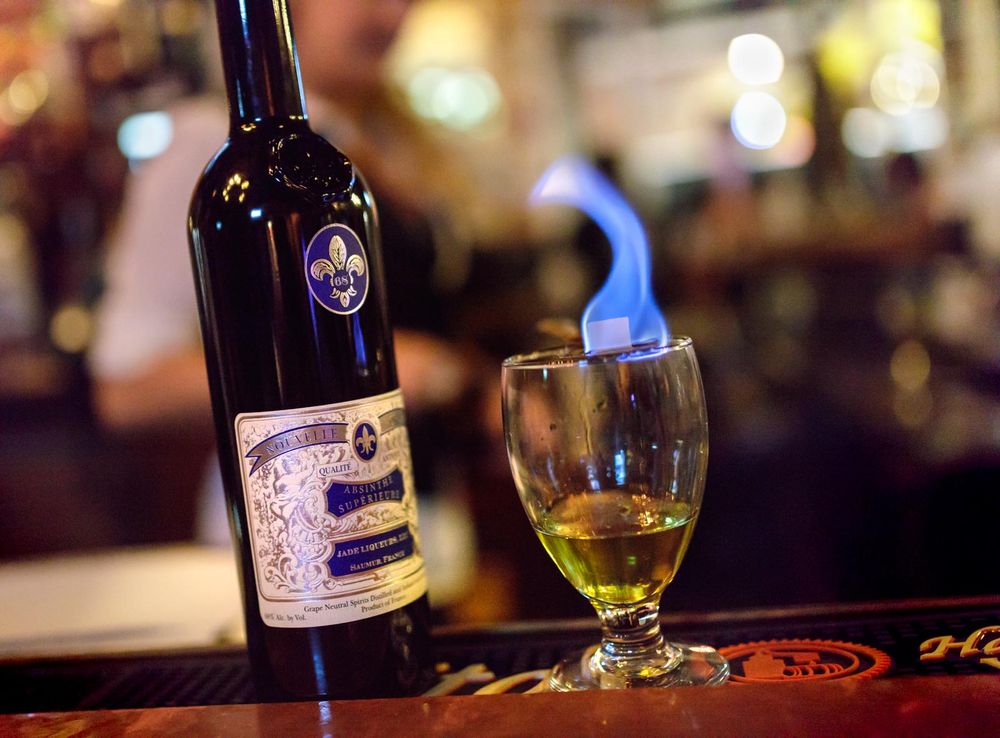 “The stuff legends are made of”

In the heart of the French Quarter, at the corner of Bourbon Street and Bienville, sits the stuff that legends are made of -- The Old Absinthe House. Many celebrities have been welcomed through our doors in the nearly two centuries since its opening -- including Oscar Wilde, P.T. Barnum, Mark Twain, Jenny Lind, Enrico Caruso, General Robert E Lee, Franklin Roosevelt, Liza Minelli and Frank Sinatra.  Indeed, the walls throughout this incredible building are covered in the framed photographs of several of our famous patrons.  The building endures the name of Jean Lafitte's because of the rumored meeting of the Pirate Jean Lafitte and Andrew Jackson as they planned the victory of the battle of New Orleans on the second floor (now the newly-renovated Jean Lafitte's Bistro).  In fact, many of those who work here will be happy to share their Jean Lafitte Ghost Stories with you!  For those not familiar with Absinthe, it is a liquor made from, among other things, wormwood.  It is said to have a bitter, licorice flavor and is greenish/chartreuse in color.  Originally brought to popularity in Europe, Absinthe found quite a following here in New Orleans ... the little Paris of the New World.  Of course, when in New Orleans, the Absinthe House was the favorite spot for those who wished to imbibe the spirit.  The building now houses Tony Moran's Restaurant and Jean Lafitte Bistro .. and the front room is still the tavern known as Jean Lafitte's Old Absinthe House!

this place is a hit or miss. first off, its right on bourbon so youre gonna see it easily. its easy to find. they have a pretty large selection of asbinthe, id say at least 10 types. yes, they... Read more

This may be the diviest bar along Bourbon St. where bartender can't remember if they have already helped us with a drink or not while we try to pay for a couple beers and a shot. I could have... Read more

This is a nice spot for a drink, be glad they serve other things besides Absinthe because boy - that stuff is strong. It has a liquorice taste that some like, especially with the bite of the... Read more