The Dixie Overland Highway, which is essentially U.S. Route 80 or U.S. Highway 80, actually predates official US Numbered Highway Association! The Dixie Overland Highway, meant to be a route between Savannah and San Diego as an ocean-to-ocean drive that could be done year-round, was incorporated in 1914, and U.S. Route 80 was established in the 1920s. Today, only the portion between Savannah and El Paso is truly intact, but driving the bit that remains is still a great trip: you get to see Selma, Montgomery, Jackson, and large portions of Texas. Besides, the idea of a coast-to-coast road trip through America's lovely Southern half is still an incredibly appealing adventure!

Ahh, the beach! Exploring the quiet little vacation town of Tybee Island, Georgia can be incredibly relaxing. There's the historic lighthouse (don't bother asking the docent if you can see Sandra Bullock's house from up here, they won't tell you), seafood and dining options (stop by The Breakfast Club for a bowl of grits to start your day!) and, of course, the ocean!

A stroll through Savannah's Forsyth Park, with its regal fountains, vintage gaslights, and trees dripping Spanish moss, will make you feel like you've stepped back in time. The park itself has also played roles in movies like Midnight in the Garden of Good and Evil and, of course, Forrest Gump. No, the bench that Forrest sits on isn't here anymore, but you can still enjoy a box of chocolates once you're done walking around!

The food at Joe's Homemade Cafe isn't too fancy, but it's all done right. The sandwiches, paninis and salads are all outstanding, but you really must save room for dessert-- the croissant bread pudding and lemon cheesecake are irresistible. It'll put you in a good mood, and fill you up for your drive down US 80, and that's what matters!

Brisket, ribs, sweet potato souffle, fried green tomatoes, okra... do you need any more convincing to stop off the highway here at Jomax BBQ for dinner?

Eventually, you'll need a place to tuck in for the night. The Dublin Farm is a romantic retreat located on a working horse farm in the tiny town of Dublin, so you know it's the real deal. The quaint but bright rooms offer views of the fields, and since one of the owners is from Italy, you can relax and enjoy a home-cooked meal and some wine!

Route 80 will take you through the quaint town of Macon, GA. The Rookery is a local gem that has a friendly atmosphere, good milkshakes (try the peach shake), better burgers (any place with a hamburger named after an Outkast album is alright in my book), and the best brunch in town-- they have an omelette with bacon and pimento cheese in it!

Grave of the Georgia Werewolf

US-80 is basically a tour through the South, and the South is a place filled with fascinating legends and mysterious lore. Get a sample of one of Georgia's mysterious tall tales at the Owen Holmes Cemetery, home of the Georgia Werewolf. As the story goes, a werewolf woman named Isabella Burt may or may not be buried here. Don't worry-- she only killed a few sheep before she was sent to a lycanthropy expert in Paris who cured her!

As you make your way through Georgia, you'll no doubt encounter tons of Civil War history. Between huge battles like Gettysburg and Vicksburg, it can be easy to forget that a lot of the Civil War was fought on the water-- and with brand-new ironclad ships and other technological developments, it was a super interesting time for naval warships. Here at the National Civil War Naval Museum, you can see the CSS Jackson, the largest remaining Confederate warship, plus the remains of some other boats and great replicas of more notable ships. Ahoy!

Keep the 19th century vibes going with a trip to Toomer's Drugs. This old-school drugstore has been open since 1896! This place is a favorite with Auburn students, and it's not hard to see why-- they sell all kinds of souvenirs, plus tasty sandwiches and ice cream. They're most famous for their fresh-squeezed lemonade! Nothing beats fresh-squeezed lemonade while exploring a quaint little Southern town!

Staying in a cottage at Crenshaw Guest House, a quaint downtown B&B, makes it super easy to explore the adorable college town of Auburn! Relax on the porch with a drink and soak up the Southern comfort of this lovely getaway.

After you leave Auburn, Route 80 will take you to Montgomery, AL. There's tons of great attractions and activities to choose from in Montgomery! From the Civil Rights Memorial Center and the Rosa Parks Museum to the Hank Williams Museum and the Alabama State Capitol, the city is rich with history. And if you find yourself working up an appetite while visiting, you can't go wrong with Chris's Hot Dogs, which has been serving up diner staples to locals and celebs like FDR, Truman, MLK, Jr., Rosa Parks, Elvis, and Whoopi Goldberg for almost 100 years!

It's hard to believe that the rickety ghost town of Cahawba was once the capital of Alabama! It used to boast 3,000 citizens... but massive floods in the mid-19th century forced the state government to finally move their operations to a city that was a little safer, and eventually the town was simply abandoned. It's pretty well preserved and is an archaeological and historical site, so take some time to wander amongst the ruins.

Highway 80 then rolls into Selma, AL. Another city rich with history, it's most famous for the role it played in the Civil Rights Movement. Check out the Edmund Pettus Bridge, where the famous marches from Selma to Montgomery were led by Dr. Martin Luther King, Jr. There's also a great Voting Rights Museum, and the Selma Interpretive Center can shed even more light on the role this little town played during the Civil Rights Movement. And Side Porch Sandwiches is located in their cute little downtown area near the bridge for when you need to grab a bite to eat!

Gaineswood Plantation, a former cotton plantation, is one of the grandest in all of Alabama, and it's been restored and opened to visitors.

The stores and mills in the historic district of Meridian, MS aren't always open, but it's neat to walk around. Entering the Causeyville General Store is like stepping back in time! You'll find a little museum and stone grist mill here... and the old buildings make for great picture-taking!

Next stop on US-80: Jackson, MS! It's home to the seriously-cool Walker's Drive-In; the vintage diner vibes and the bistro-style menu (think, veal and white truffle risotto) mean you can enjoy the old-school atmosphere with modern cuisine. It's the best of both worlds!

Besides awesome food, there are plenty of sights to see in Jackson, too. The Medgar Evers Home Historic Site, the Eudora Welty House, and the Mississippi Museum of Art are all unique spots to check out while in town.

The Confederate loss during the crucial Civil War battle at Vicksburg was brutal on both armies, but it was also a turning point in the war. Check out the USS Cairo Gunboat and Museum, stroll through the solemn cemetery, and explore the exhibits at the visitor center to learn even more about this important battlefield.

Once again, there are no shortage of adorable places to spend the night along Route 80. The Duff Green Mansion, a gorgeous bed and breakfast, is dripping with history-- as they put it, "A visit to the Duff Green Mansion reveals bloodstained floors, the site of the family’s Civil War cave and the details of a rich history of Vicksburg before, during and after the siege. A few visitors have even seen and experienced the ghosts of a Confederate soldier and Little Annie Green who died at age six." History buffs will definitely want to book a stay here!

Since the basic idea of the Dixie Overland Highway was to be able to drive from one coast to another any time of the year, there's no bad time to take a road trip along the route. Of course, summers in Texas can be brutal, and the spring often brings rain, but really, it's a fabulous drive any time of the year! 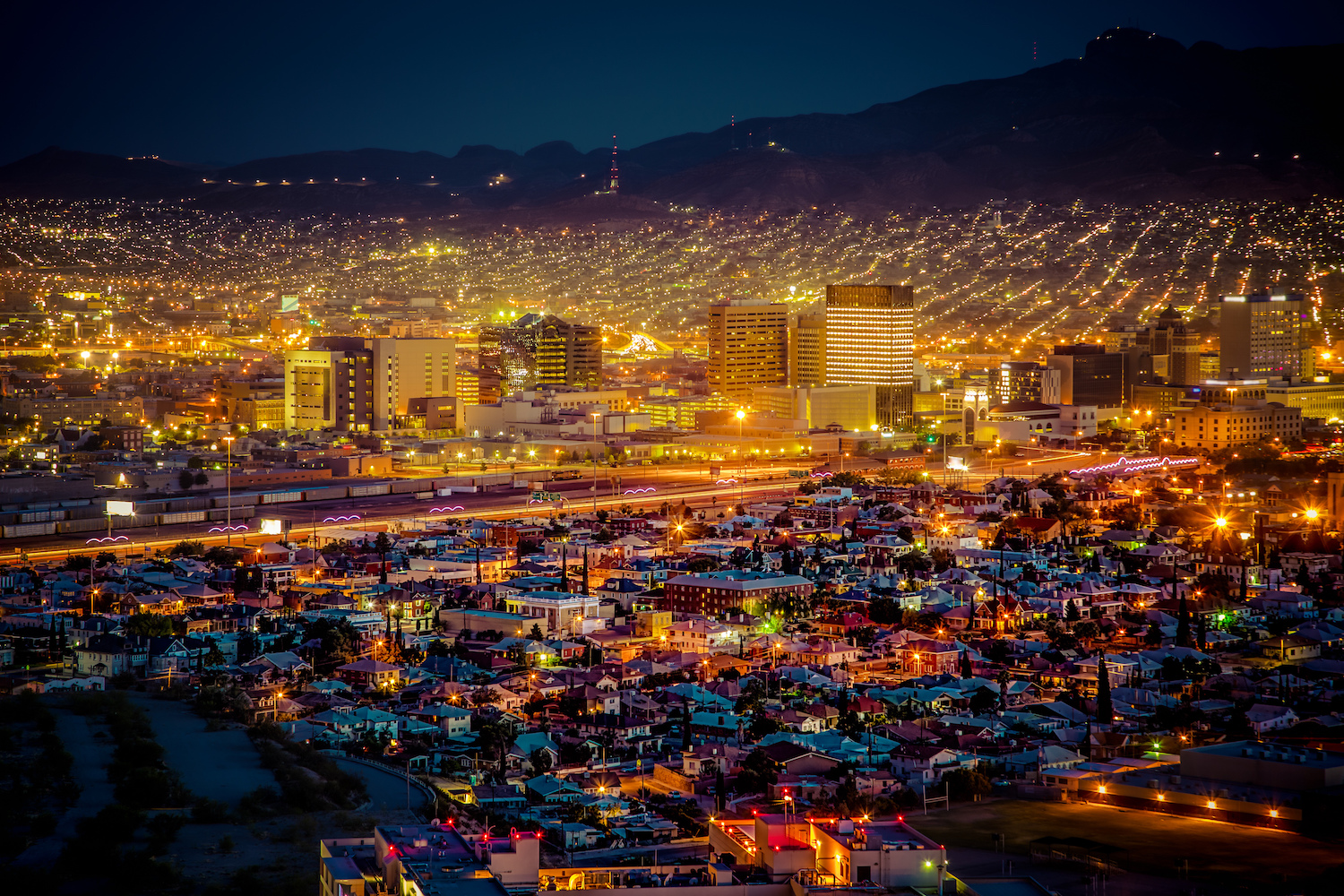