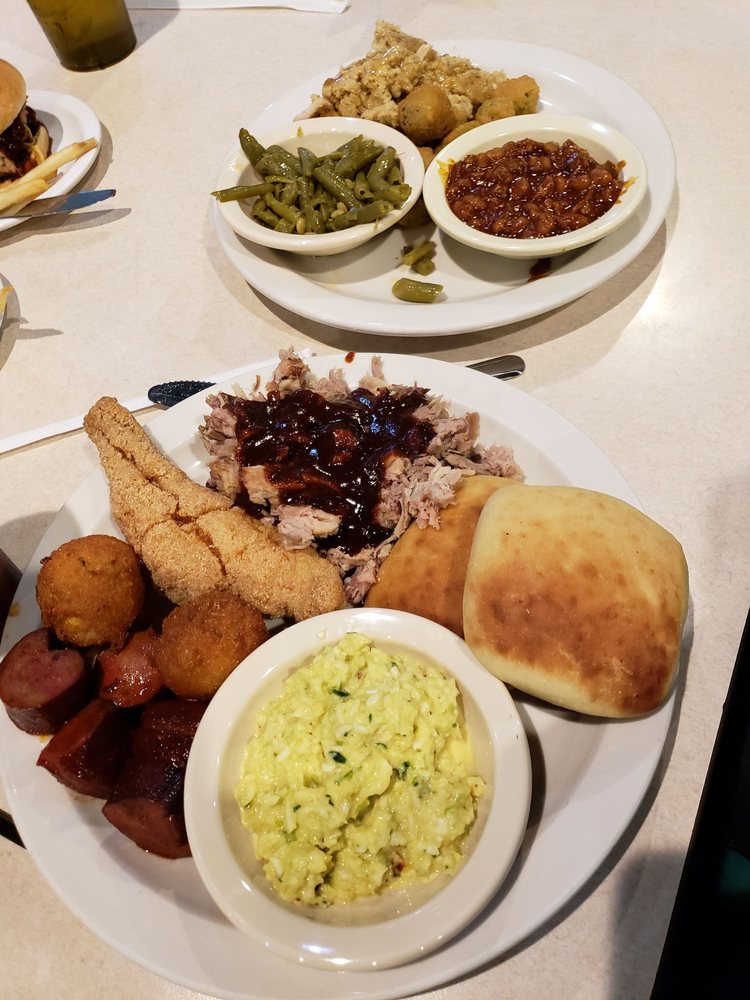 “Elvis Presley was a regular!”

It's lunch and dinner buffets always include its famous chopped pork shoulder as well as golden fried catfish. Special items such as baby back ribs, BBQ chicken, hot wings and country fried steak are included on different days and nights. Assorted side items such as BBQ beans, homemade cole slaw, hush puppies, and homemade spaghetti are also offered. The year was 1922, a time widely accepted as the beginning of Memphis' love affair for pit-smoked barbecue. For this was the year Leonard Heuberger opened his little stand of 5 stools, selling his creation, a barbecue sandwich, for just five cents. He couldn't keep up with demand and that modest beginning soon became the largest drive-in restaurant of its time. People came from near and far to pig-out on pit-cooked ribs and pork shoulders that Leonard's popularized. The "King" was a regular. Elvis would bring his friends for after-hours parties that lasted 'til sunrise.  The old drive-in location is gone and Leonard Heuberger has since passed away, but the labor intensive recipes that made Leonard's unique remain intact under the watchful eye of Dan Brown, the owner. Dan started working at Leonard's when he was 15 as a sandwich man. Heuberger understood Dan's love for the restaurant business, and guided him through every phase of the Leonard's tradition. Now, nearly a half century later, Dan, his wife Janet, and a host of long time employees continue to watch over the daily restaurant seatings, tour bus groups and caterings with the same care that has established Leonard's as a barbecue mecca for over 85 years.

The lunch time buffet requires big plates and they've got em. The plates would be platters anywhere else. This excellent bobbycue deserving of the crowds that descended upon the serving line. Go... Read more

They cater our Church socials from time to time, and we have always enjoyed the food and the service. Memphis's oldest BBQ restaurant and it's consistently delicious. Read more

My favorite Bbq place in Memphis. Have been going there for 65 years. This is authentic, classic Memphis Bbq. Their sauce is well balanced and delicious, their meat servings are generous, and... Read more