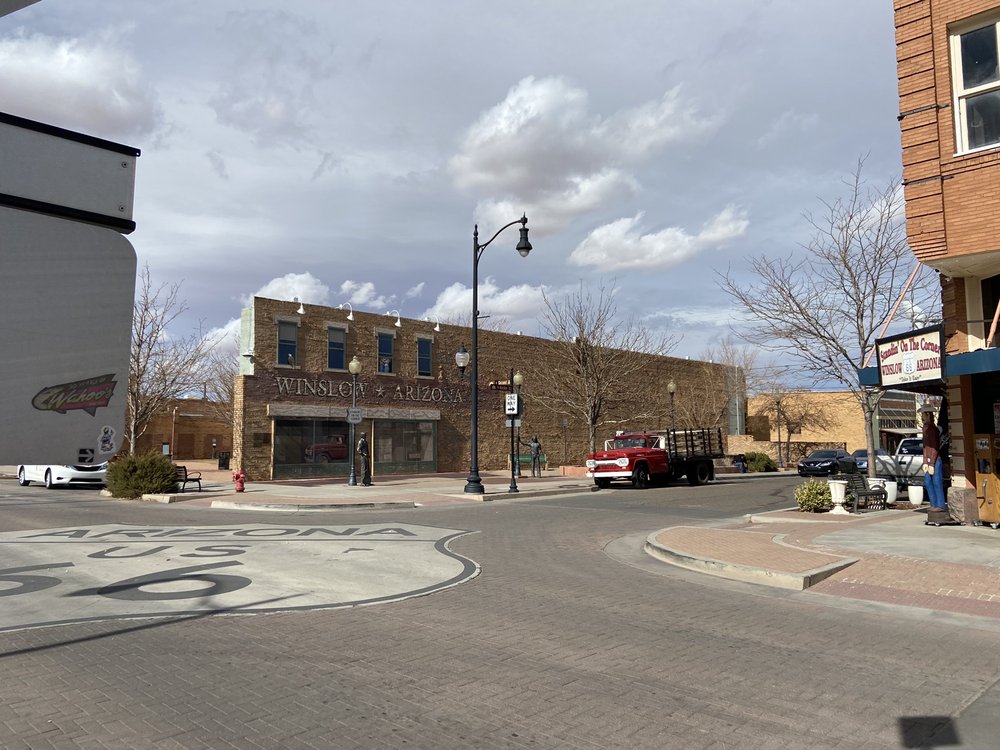 Standin' on the Corner Park is a publicly operated park, commemorating the Eagles-Jackson Browne song "Take It Easy". The park contains a two-story trompe-l'œil mural by John Pugh, and a life-size bronze statue by Ron Adamson of a man standing on a corner with a guitar. The park is surrounded by a wall of bricks, each with a donor's name on it, and a story by each of the donors describing their fondness for Winslow. Until the 1960s, Winslow was a thriving town in northern Arizona just off Route 66. Construction of the $7.7 million bypass around Winslow began soon after 1977. When I-40 bypassed the community many local businesses disappeared, tourism being among the hardest hit. While some local jobs remained (as Winslow is the base of operation for a thousand railroad workers), the local downtown was badly hurt by the influx of national chains (such as Walmart and McDonalds) along the new Interstate Highway to the north of the town. Twenty years passed and Winslow was stuck in a commercial rut. In 1997, the La Posada Hotel (a former Harvey House on the Santa Fe Railroad, long at risk for demolition) was restored and reopened. Listing of La Posada Historic District on the National Register of Historic Places would serve as a first step toward re-awakening the town.

If you blink you'll miss it. Seriously it comes up on you quick. If you're an Eagle's fan you know you have to stop here. I couldn't help but sing verse or two when we pulled up. Probably the... Read more

This is literally a 10 minute stop. Not much here outside of "Standing on a Corner" park. There are 2 souvenir shops, a bar and a cafe. That's it. It's a "must" to take Route 66 photos if you are... Read more

Here it is...what I thought I'd never see when I started Yelping a few years back! I never even looked at it as a possibility! Review #1,000!!! What better place than a true piece of Americana!... Read more

Standin' On A Corner