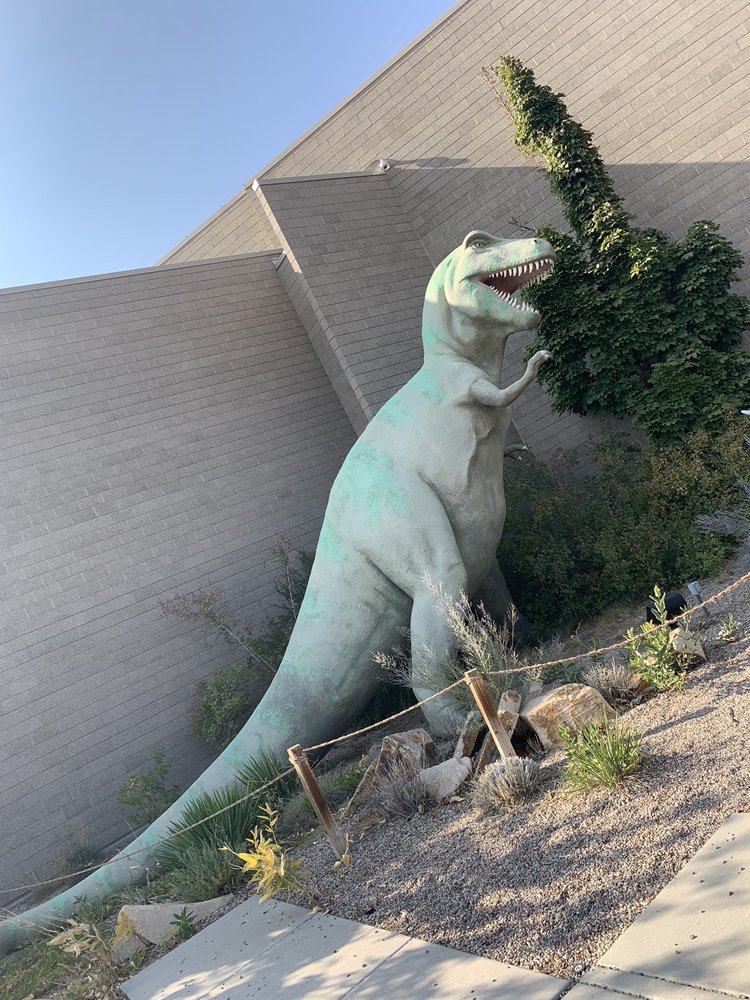 Discover the prehistoric world, dig for fossils, and explore the dinosaur garden. Within an 80-mile radius of Vernal, evidence of the entire Earth's history is visible. Utah Field House reveals this geologic story with hands-on exhibits and activities. In 1942, Arthur G. Nord of the U.S. Forest Service wrote the following:In some corner of most every museum of natural history there is found remnants of prehistoric life, much of which hascome from (the) Uintah Basin. The guides in these institutions can thrill one with interesting information. Nothing could be more appropriate than to have a field museum with specimens of the natural and also artificial creations of the prehistoric life right in the heart of the area in which it is found.In 1945, through efforts of the Vernal Lions Club and othersin the community, the Utah State Legislature approved construction of a state-owned natural history museum in Vernal. Senate Bill 141 authorized the erection of a suitable building for the purpose of housing and displaying the fossil remains of ancient plant and animal life and other objects of Natural History, said building to be known as the Utah Field House of Natural History and to be built at Vernal, Utah...In 1946, Governor Herbert B. Maw made funds available forits construction and the Utah Field House opened in October 1948. By October 1998, it had hosted over 6,000,000 visitors.The park is a showcase of eastern Utah's geologic past and natural history. The main features are the museum and the Dinosaur Garden. A wealth of geologic, paleontologic, archaeologic and biologic specimens are displayed, reviewing the natural history of the Uinta Mountains and Uinta Basin.Exhibits include nearly three billion years of earth history asit is exposed in the nearby Uinta Mountains and Uinta Basin. In the geology hall, fossils are displayed from rocks covering more than 600 million years of life, ranging from algae to dinosaurs to highly advanced mammals. Artistic representations of these life forms, plus the geology of the area painted by G.E. Untermann Sr. (father of the original director of the Field House), are displayed throughout the museum.The anthropology hall includes examples of ancient and recent Native American life in the Uintas. Highlighted are the works of the Fremont Indians, a group that lived in this areafrom approximately 700 to 1250 AD. Reproductions of local rock art are displayed throughout the room. In addition there is a section that emphasizes Ute handicrafts and cultural items.In the natural history hall, examples of local animal life are arranged along a mural depicting life as one descends from the high Uinta Mountains into the Uinta Basin. Outside the museum is the Dinosaur Garden, 17 full-size replicas of prehistoric animals ranging in age from the Pennsylvanian through the Pleistocene. Most of these animals were sculpted by Elbert Porter and bought by the state of Utah for the Field House in 1977. A new addition, Ceolophysis, a Triassicdinosaur made by artist David Thomas, was purchased in 1993.Opened to the public as a state park in 1959. Park Elevation: 5,300 feet

Brought a group of teen girls here mid july. We decided to check this out as we have one teen that is super interested in paleontology. We also were wanting a break from 90+ degree heat as we... Read more

I'm a dinosaur geek and was so excited for a weekend visit to Vernal, Utah and all of their dino attractions. I was prepared to spend an entire day at the Utah Field House of Natural History, but... Read more

We had fun here! So much to see and has a cute little gift shop! Would definitely recommend. Read more