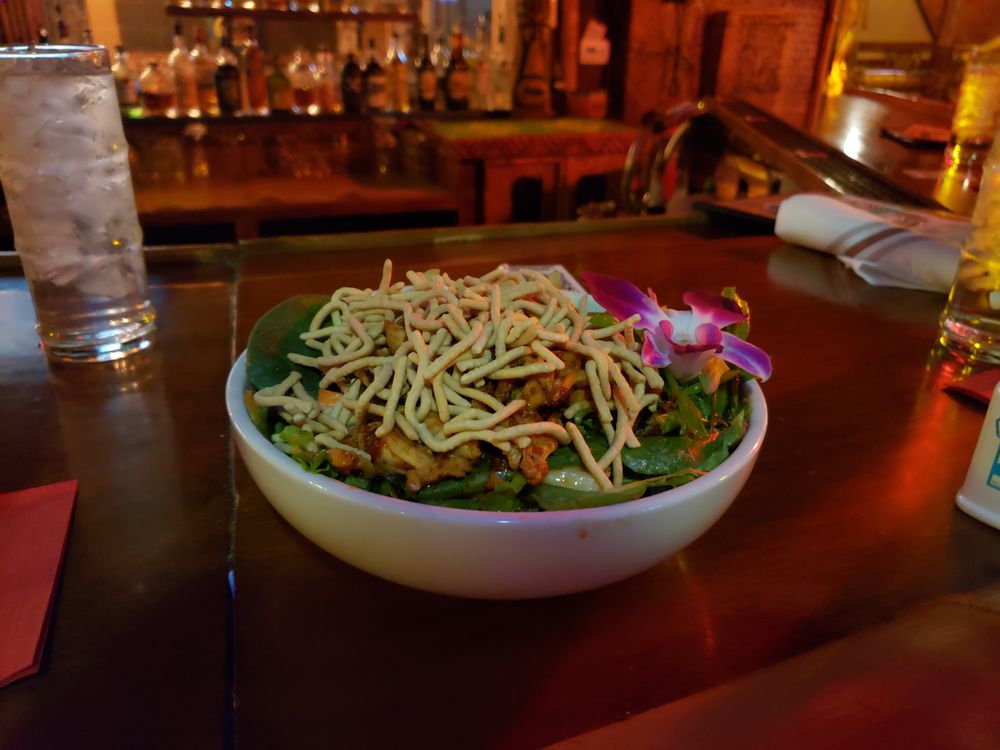 Kon Tiki opened it’s doors and began welcoming patrons to Paradise in 1963. The original owner, Dean Short, moved his family from Ohio in the 1940’s and used the experience he had gained working in his family’s bar back east to open several restaurants in Tucson.The family friendly atmosphere and success of his first restaurants, The Panda Steakhouse and Ye Olde Lantern, inspired Dean to branch out and fulfill his desire to bring a taste of something new and different to Tucson.On one of his frequent trips to California, Mr Short noticed an increasing fascination with exotic cultures that evoked the enticing fantasy of a carefree lifestyle, tropical islands and beautiful women. This was the seed that blossomed into a tropical oasis in the middle of the desert, otherwise known as Kon Tiki. Kon Tiki today looks almost exactly the same as it did when it first opened. The area behind the bar has hosted several exotic inhabitants, from birds to young scantily-clad women painting ‘beatnik’ style art to it’s last inhabitant Thor, a Monitor Lizard. The large aquarium once held Piranah fish.When movies were being shot in and around Tucson the Kon Tiki played host to the stars, including Clint Eastwood, Robert Michum, Lee Marvin and Robert Wagner. During the 1980's Kon Tiki was owned by Mr. Kim, a former chef at the restaurant, and he ordered new barware stamped with 'Kim's Kon Tiki', although the bar itself never legally changed name.The current owner of Kon Tiki, Paul Christopher, started working here as a dishwasher & busboy when he was 15 years old. He worked his way up to server, then bartender and eventual owner. In 2010 the gas-powered tiki torches that sit atop the Kon Tiki sign were restored and re-lit during a big celebration created by local artists (and regulars) Velvel Glass. Featuring local favorites Shrimp Chaperone and Flam Chen, Vegas band Thee Swank Bastards and The Tikiyaki Orchestra from L.A. And a darn fine time was had by all! Over the years, most people that have lived in Tucson have, at some point, marked a special moment or turning point in their life at the Kon Tiki.  We would like to thank you for celebrating those occasions with us and allowing us to be a part of those wonderful memories.

Love the retro vibe here. I was pleasantly surprised by how good the food is here- primarily because I thought it was mostly just a bar. The only reason it's not 5 stars is because I feel like... Read more

One of the best hidden gems in Tucson excellent place for drinks fun food & relaxing with friends or family. It's a great meeting place for birthday parties celebrations of all types from... Read more

Oh what fun time Kon Tiki was! Until yesterday, I had only heard of, and seen the place sandwiched between two strip malls with an odd mix of businesses on East Broadway. If you're a Pima County... Read more