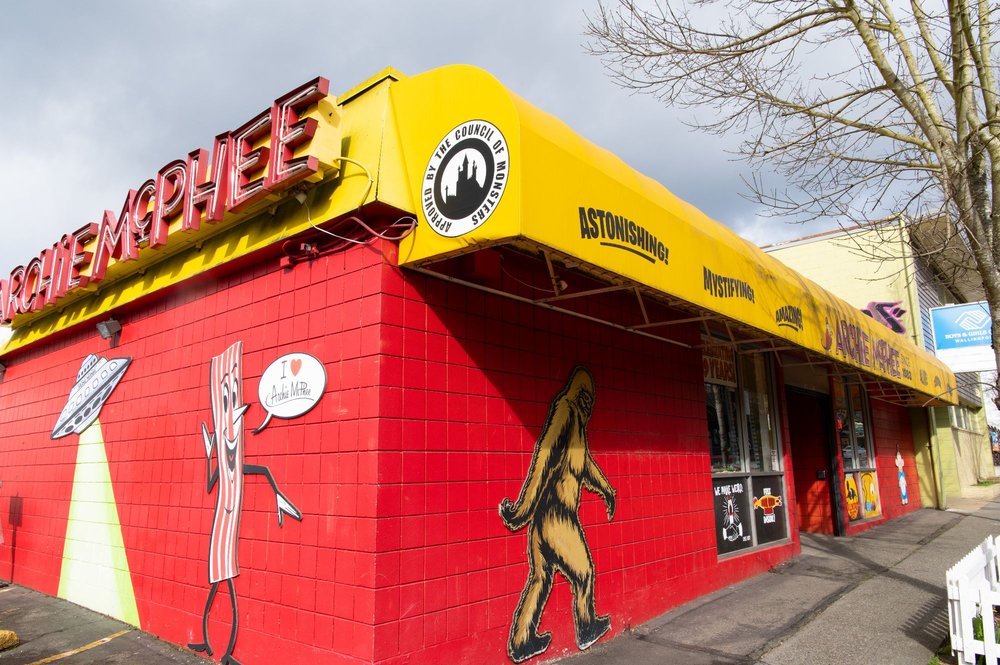 “Supplying wierd and kooky toys since 1983”

Archie McPhee has been supplying gifts and toys to Seattle since 1983. Located in Seattle’s Wallingford neighborhood, it’s a one stop shop for party supplies, crafts, costumes, miniatures and the weirdest collection of toys and candy that you’ve ever seen. Widely considered to be a Mecca for connoisseurs of the strange and one of Seattle’s top ten weird destinations, it is truly an attraction without a parallel. Believe it or not, Archie McPhee was a real person. In 1924, a young Archie McPhee of Bismark, North Dakota, decided that he was going to bring the revolutionary new music called “jazz” to the Orient. He formed a swinging jazz band, the North Star Music Makers, and as their manager booked passage for them on the S.S. President Madison as the ship’s band.

Glad to find this find purveyor of grizzly bear piggy banks is still around. They have everything you didn't know existed and now desperately need. I'z first introduced to AM via catalog in the... Read more

Reviewed by
Paolo B.

If novelties and rubber chickens are your thing, then this is definitely the place for you. I've been wanting to go here for quite some time and when I finally got the chance to, it just didn't do... Read more

Archie McPhee is a staple for my work colleagues and myself when we want to add some ridiculousness to our office. When I was recently about to head off on my trip to Seattle, they legit sent me a... Read more