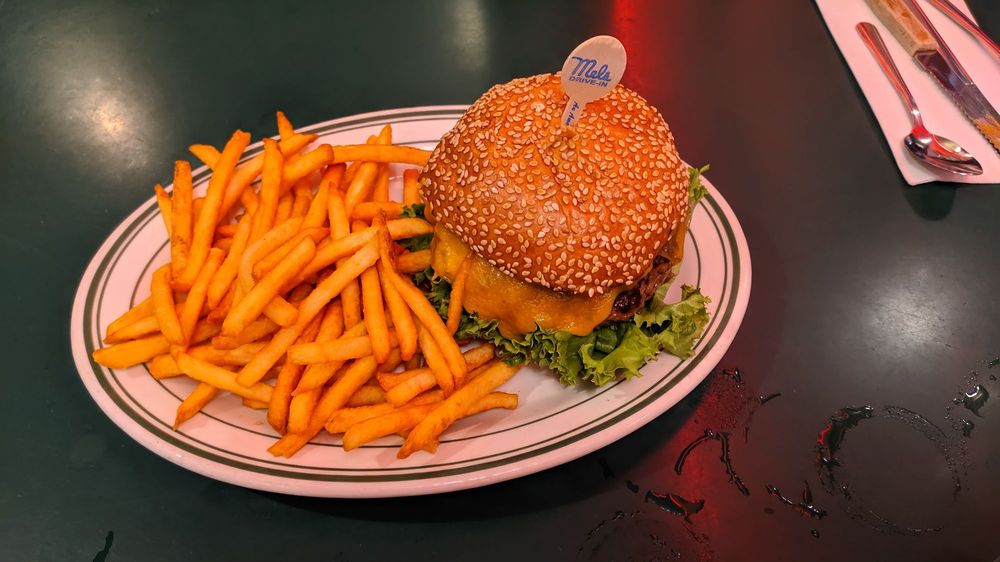 The first of the Second Generation Mel's created to honor the original featured in American Graffiti. Steven Weiss and partner Donald Wagstaff opened the first of the "Next Generation" Mel's Drive-ins in September of 1985. The restaurant, located at 2165 Lombard Street in San Francisco, appealed to families wanting to share the tastes, sights, and sounds of the 1950s drive-in era with their children. A little over two years later, a second location was established on Geary Boulevard, also in San Francisco. The next two restaurants opened in Los Angeles, one in Sherman Oaks and the other in West Hollywood on the Sunset Strip. Van Ness Avenue is home to the third San Francisco location, and the fourth opened its doors in November of 2000 next to the Sony Metreon Center in the Yerba Buena area. In the heart of Hollywood on the famous Hollywood Boulevard our fifth location was opened with a full-service Celebrity Bar.

We were in the mood for Ramen but nothing was open. Spotted Mel's and walked over. They checked our vaccination card & seated us Despite being open until 10 they close the grill at 9. Enjoyed... Read more

So this is an unusual review for me. Why? Well, I have eaten at melts for ages - before COVID and now I'll don't live in San Francisco any longer and I am only visiting. In the last six month I... Read more

Twosday the 5th on 2022's April 16h32 I was rightly perplexed on getting loosed from my dentist's chair sooo early. It was barely just over an hour's plus when he vamoosed me, and without even a... Read more