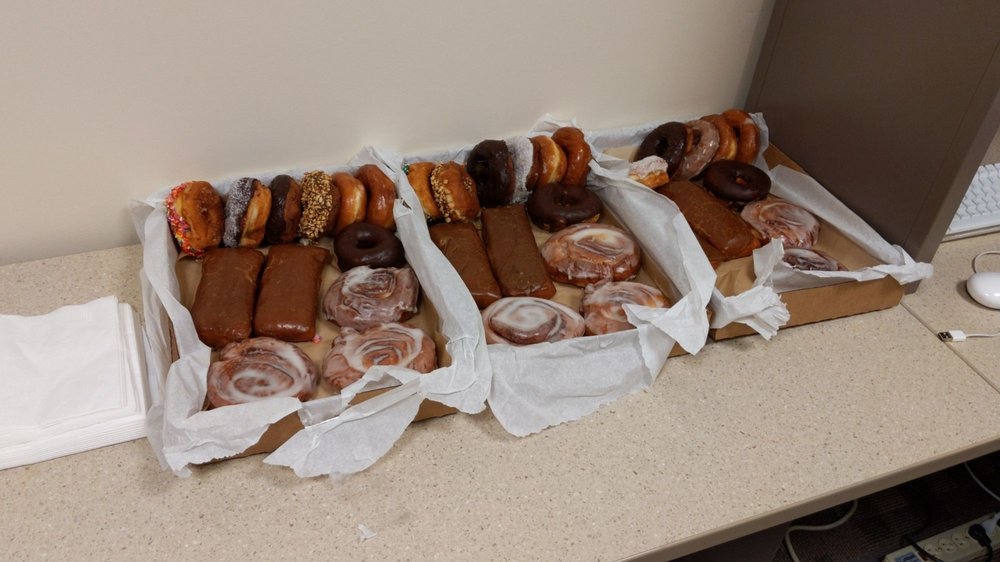 “Home of the Spudnut Donut”

The Spudnut Shop was established in 1948 by my dad, Barlow Ghirardo, and my uncle, Jerry Bell. With one $50 check, they bought a franchise and 100 sacks of Spudnut flour. The shop was originally located in the Richland Wye and operated primarily as a wholesale business. When the highway was built in 1950, The Spudnut Shop moved to its present location in Uptown Richland. What's a Spudnut, you may ask, and isn't it the same as a doughnut? Well, Spudnuts are different than doughnuts. For one thing, they're made from potato flour. For another thing, they just plain taste better.We feel that it is only fair to warn you that Spudnuts are habit forming. Eating just one could turn you into a regular customer and one of our life-long friends. If you're not careful, you could get yourself coming in here on a daily basis to chat with friends or just to relax with a cup of coffee, a Spudnut, and a newspaper. Before you know it, we'll be greeting you by your first name, and the waitress will be serving up your favorite Spudnut before you even order it. After a few visits, you may get to feel so at home that you start leaving our number on your answering machine. We know it's scary, but that's the way it's been since Dad first opened up in 1948. So give your Spudnut order the careful consideration it deserves. Remember, we're talking about a relationship here. For the past 64 years, we've served tens of thousands of people and countless Spudnuts (not to mention Spuddies, Spuffins, and other treats). We were even featured on the Food Network’s “Unwrapped” and the Travel Channel special "Donut Paradise." We hope that you'll be able to stop by for a Spudnut, a cup of coffee, and our unique brand of hospitality.

When you walk in, employees are rolling dough right in front of you. No smile, a stare glare. Glancing around, customers are seated and dining in-between sporadic large trays of open air exposed... Read more

Great little spot! I ordered a maple bar, it was unique and delicious. My son ended up eating most of mine too, rather than his sprinkled donut. Coffee is dinner style, it gets the caffeinated job... Read more

The best donuts in the Tri-Cities for sure. They are always fresh and unique. I love the different options and the excellent prices! Read more