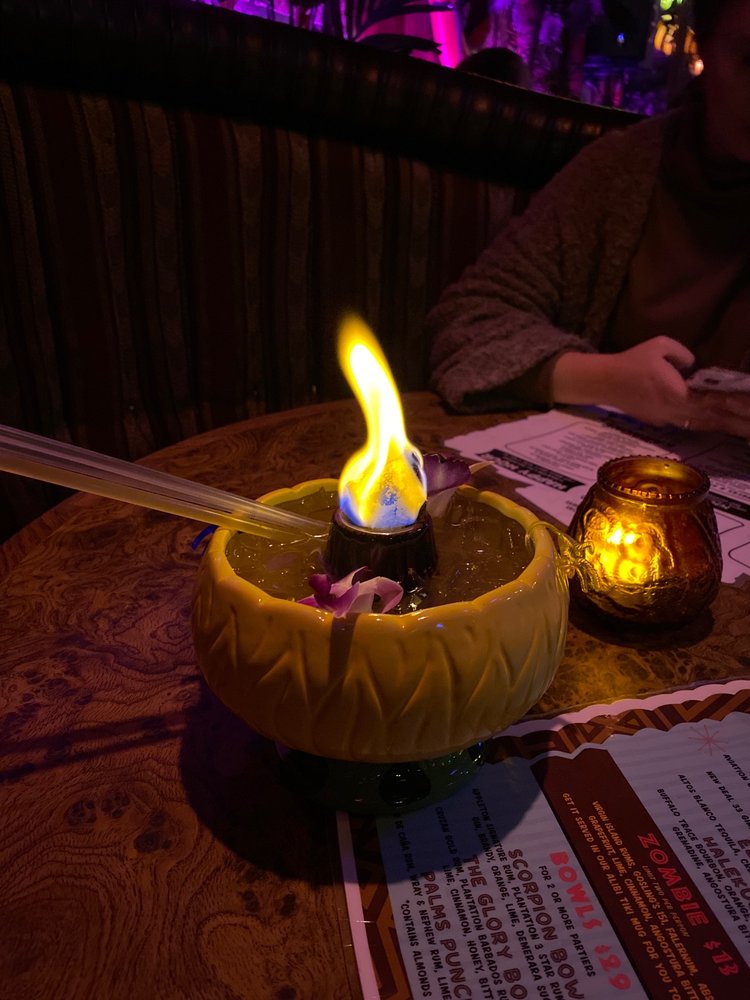 The orignal home of The Alibi was a nice stop for horeses and buggies as they traveled up and down the dirt trail known as the Inter-state in the late 1800's. "Chat-n-Nibble", as it was known to travelers then, served up some of the finest grub a fellow could find at a breakfast and lunch counter. A small beginning! The Max AlibiThe next business to call the spot home was a tiny tavern run by Mr. Peterson. "Max Alibi" was a popular spot to stop, and saw much success under his ownership. Peterson gave the business a name that would last far into the 1990's. Island Inspirations The third owner, Roy Ell, saw a jewel of a restaurant in this little stop. He leased the building in 1947 and renamed the place "The Alibi". Roy spent some time traveling to Hawaii and felt his friends and neighbhors deserved to experience the beauty and style he found on the islands. Polynesian decor was his goald to enhance his restaurant, even though it was hard to find suppliers. The '50's found "The Alibi" expanding to a full restaurant and lounge. The building engulfed a home which sat behind the restaurant and The Alibi was proving itself popular. The famed food and delightful exotic surroundings kept bringing folks back for a piece of paradise right in their own community. Taking Over The Neighbors In the 70's, Roy added a magnificent 3-dimensional mural and had carved rails installed in The Alibi. By the 80's, The Alibi was a grand replica of the South Pacific, even businesses from overseas came to copy the decor.Roy took his next step, purchased the property from Mr. Peterson, and engulfed the Texaco Station next door for parking. Today, Like Yesterday In the 80's, The Alibi was leased once again, with the agreement that the decor would not be altered. In 1991, the current owner, Larry White, took over and has agreed to keep the style and flourish that has been so magnificent for some 40 years. Like A Tropical Paradise As you sit in The Alibi lounge, restaurant, or one of the many nooks and shelters, under shell lamp shades, you can almost feel the cool summer breeze blow across the beach. Sipping tantalized tropical drinks, letting the atmosphere sink in, nibbling on seafood appetizers and entrees, it's easy to relax and enjoy a mini vacation in the midst of your day.

Original tiki bar (opened in 1947) meets dive bar (dark and dingy) meets karaoke (every night starting at 8pm), the Alibi is a platypus of the tiki world and I love it. Had many drinks there... Read more

Came on a Saturday night with friends. Arrived around 10-ish. The crowd wasn't too skinny and the crowd was definitely more caucasian, low energy vibes and song choices were questionable, but... Read more

Came in on a Thursday night and ordered food and due to a mix up I waited for over an hour for my order. I must say that the customer service and kindness provided by Kima the bartender was... Read more