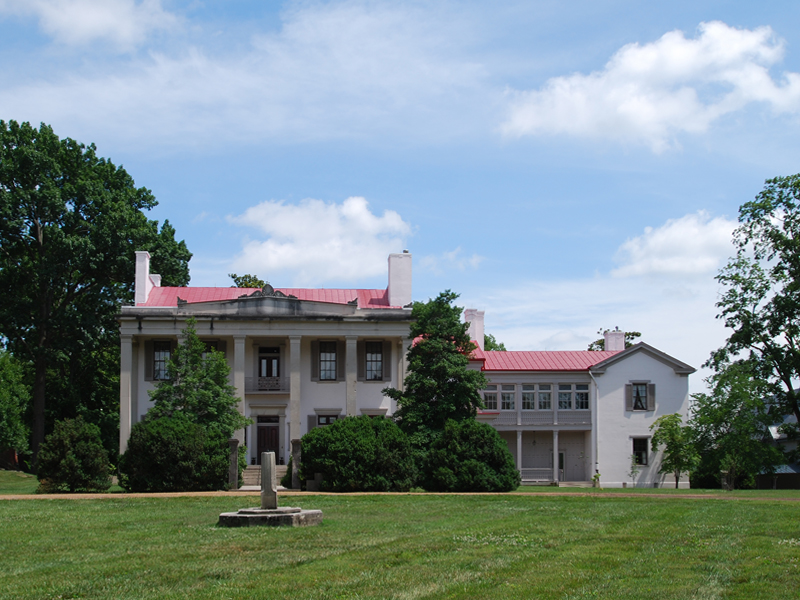 The land known today as Belle Meade, has stood witness to centuries of human history. Native tribes used the woodlands and meadows as a place to hunt wild game. Over time a trail developed through the land that was eventually known as the old Natchez road by European settlers. Ancient tribes had used the trail as a trade route throughout the Southeast and newly arrived settlers did the same in the 18th and 19th centuries. As the road developed, more and more settlers moved into the area and purchased the old hunting grounds for farmland. Following his marriage to Susannah Shute in 1806, John Harding purchased 200 acres of land from Daniel Dunham. Harding had worked for his father managing his farm operations and overseeing the labor of his Fathers slaves. Giles Harding had paid his son for his work and John used the money to purchase his own land. Harding had no formal education but he was a skilled farmer and businessman. Just like his father before him, Harding needed labor and he began to purchase enslaved people in the Deep South and move them to his new farm. From the beginning, the Belle Meade farm was a diverse operation. Ben worked in a small blacksmith shop near the old Natchez road and Harding used Patrick as a farm laborer. Eventually a cotton gin was built on Harding’s farm along with a grist mill and saw mill. Enslaved people were needed for all of these enterprises and slowly Harding became one of the largest slave holders in Nashville. By 1820, Harding supervised the construction of a new brick house on a small hill and he began to call his farm “Belle Meade” or beautiful meadow. With the popularity of thoroughbred racing moving west from Virginia and the Carolinas, Harding eventually added thoroughbred boarding and breeding to his list of services offered at Belle Meade. John’s first foray into the thoroughbred industry was with the boarding of stallions. As early as 1816, Harding placed advertisements in Nashville newspapers listing thoroughbreds standing stud at his farm.  He quickly became interested in purchasing thoroughbreds and he began to race them on local racetracks. He registered his own racing silks with the Nashville Jockey Club in 1823 and was training horses on the track at his McSpadden’s Bend Farm. With this new business enterprise, a new set of labor was needed and soon enslaved Jockeys, trainers, and grooms were added to the Belle Meade workforce. John’s son William Giles Harding was living on the McSpadden’s Bend property and worked with his father training horses. By the time William Giles assumed management of the Belle Meade plantation in 1839, he was keenly interested in all aspects of breeding and racing. He was active in several local jockey clubs and raced at all the area tracks including Clover Bottom, Gallatin, and Nashville. By 1860, Belle Meade had grown to over 3500 acres with 136 enslaved people working for Harding and his family.  The Civil War interrupted breeding and racing in the southern United States. General Harding was able to keep all of his thoroughbred horses, even while other farms were having their horses requisitioned by both armies. After the war, he was able to continue his horse farm and in 1867-1868, General Harding won more purses with his own horses than any man living at that time in the United States. By 1870, only five formerly enslaved families lived at Belle Meade. Several families continued to work for the Harding family though they moved off of the farm and purchased homes and land around Nashville. In 1867, Harding held the first sale of horses bred on his farm following the War. He was the first in Tennessee to use the auction system for selling thoroughbreds. Yearling sales began in 1867 and were held annually until 1902. With the auction system, he became the most successful thoroughbred breeder and distributor the in the State of Tennessee. When General Harding died in 1886, The Spirit of the Times praised him as having done as much to promote breeding interests as any American in the 19th century. In 1868, General William Hicks Jackson married General Harding’s oldest daughter Selene and moved into the Belle Meade mansion. He was an avid horseman and began working with his father-in-law to expand the breeding farm. By 1875, they had decided to retire their racing silks and concentrate exclusively on breeding. After General Harding’s death, General Jackson assumed one-third ownership of the horse farm with Selene’s half-brother John and General Jackson’s brother Howell, who married Selene’s Sister Mary Elizabeth. General Jackson owned one-third of the farm, however he was the only family member working as daily manager. General Jackson’s flair for entertaining and his confident, outgoing nature helped the farm to attract thousands of people to the yearling sales. While General Harding expanded the family home in 1853, introducing the Greek revival style seen today, General Jackson modernized the interior in 1883. The family added three full bathrooms, complete with hot and cold running water and a telephone, by 1887. Many guests from around the country were drawn to Belle Meade in the 1880s and 1890s. They saw an old Southern plantation with an old aristocratic family at its helm and many formerly enslaved employees working its vast business operations. Guests were awed by the spectacle of a farm that seemed to defy the passage of time. The stereotype of the old  Southern plantation made Belle Meade a popular destination for many including President and Mrs. Grover Cleveland, Robert Todd Lincoln, General U.S. Grant, General William T. Sherman, General Winfield Scott Hancock, and Adlai E. Stevenson. Guests were treated to old fashioned barbeques, trips to the massive deer park on the estate, and tours of the thoroughbred paddocks to see the living foundation of the success of Belle Meade. By 1893, a weakened economy led the family into serious debt. By 1906, all of the 2600 acres that at one time belonged to Selene and General Jackson had been auctioned or sold including the Belle Meade Mansion. The “palmy days” at Belle Meade had ended.

I grew up in this neighborhood and even as a Nashville native- I love touring Belle Meade Plantation periodically.. They change the displays throughout the house seasonal to reflect what the family would have been doing that time of year- i.e. netting over the mirrors and such in summer, decorations at Xmas time. You get a slightly different tour each time you go depending on the person giving the tour.

P.S. My favorite story is that one of the daughters received an engagement ring so large, she doubted it was real. Someone told her diamonds would cut glass and if you look at the glass in the window in the office facing the backyard- you can see the beautiful, fine cursive where she wrote her name with the ring.

Words cannot describe how beautiful and magical Belle Meade is.

The tour was fantastic with very knowledgable guides. The history of the home really came to life.

If you want to skip out on the tour, the grounds are as equally amazing, and there are plenty of self guided areas.

I've visited Belle Meade Plantation twice. The first time I took the tour, which was full of information about the family, how they made their fortune, the social customs, and the changes to the house and its land over time. The second time I just walked the grounds as a friend took the tour. I found the cost of the tour worth the information and viewing of the house. There are often events going on, as the second time I was there it was being prepped for a wedding. The wines there are very nice as well, so stop by the wine tasting.

We just walked around without paying for the tour, which was fine since there are multiple buildings to look at and the grounds are really pretty. I would love to come back and take the proper tour but it looked pretty pricey.

This planation is wonderful. The tour of the mansion was comprehensive and interesting. The grounds are beautiful and you could explore for hours. There is also a winery and restaurant on site. Definitely recommend for horse lovers.

Pretty neat place was surprised that it was really only a horse farm only downfall was we could not take pictures inside the mansion.

Worth a visit. Tour was kinda costly , guide was ok, but did include a wine tasting at the end - a perk for me. Grounds were outstanding to explore! Beautiful part about of town!

Took the tour and did the kids scavenger hunt. The scavenger hunt is meant for younger kiddos and required a lot of time to make it worth it. Each stop had a treasure chest with toys, games and a craft. We had an hour to do the hunt and had to rush the kids.

Worth visiting, but check their hours, because if you arrive after closing, you will only be able to peek through a bush at a tiny, narrow view of the grounds, as everything is blocked by walls, trees, and bushes.

Be the first to add a review to the Belle Meade Plantation.