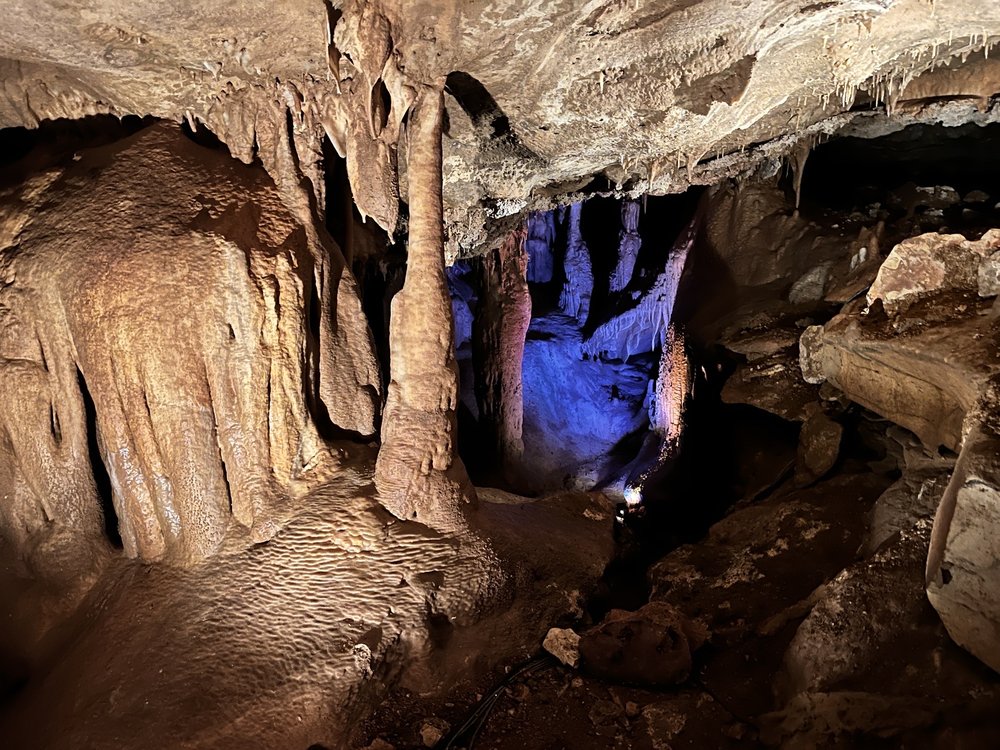 Inner Space Cavern is a karst cave located in Georgetown, Texas. The cave was discovered by the Texas Highway Department in 1963 during the construction of Interstate 35. There were several large openings to the caverns during the Ice Age, and several skeletons of prehistoric Ice-Age animals have been found in the caverns; many were trapped in the cave after they fell through the opening, unable to escape, and others drowned in thick, quicksand-like mud at the bottom of watering holes. Some filled-in sinkholes have been found, including the prehistoric entrance to the caverns. Several miles of cave passage have been surveyed, with many sections of the cave remaining unexplored, due to filled-in areas blocking passage. The caverns were carved by water passing through Edwards limestone. The caverns are estimated to be 90–100 million years old but were only open to the surface since the late Pleistocene period 20,000–45,000 years ago, evidenced by finds of mammoth and saber-toothed cat bones. All natural entrances closed approximately 14,000 years ago. The cave was opened to the public in 1966. Three different levels of tours are available, ranging from a basic guided tour to guided spelunking, with over 1.2 miles of passage being open to the public. However, non-public passages are well-guarded and independent exploration is not allowed. Apart from the main entrance, which was created by dynamite blasts, one of the original 18-inch diameter drilled holes serves as an emergency entryway/exit and a means for ventilating the cave.

I made the mistake of going to this place once before after a heavy rain. The cavern was flooded and we were sold tickets any way. We went about 10' into the cavern and the guide stopped. I was... Read more

I watched some tiktok that was talking about how there were caverns in Texas. I had little expectations since right next to a highway does not seem like a very nice place for a cave tour. The last... Read more

It's quite an experience. Our tour guide, Annabelle, was funny and insightful. We did the beginner's tour ($22.50 for adults), and it was an hour round trip for slight incline/declines and low... Read more