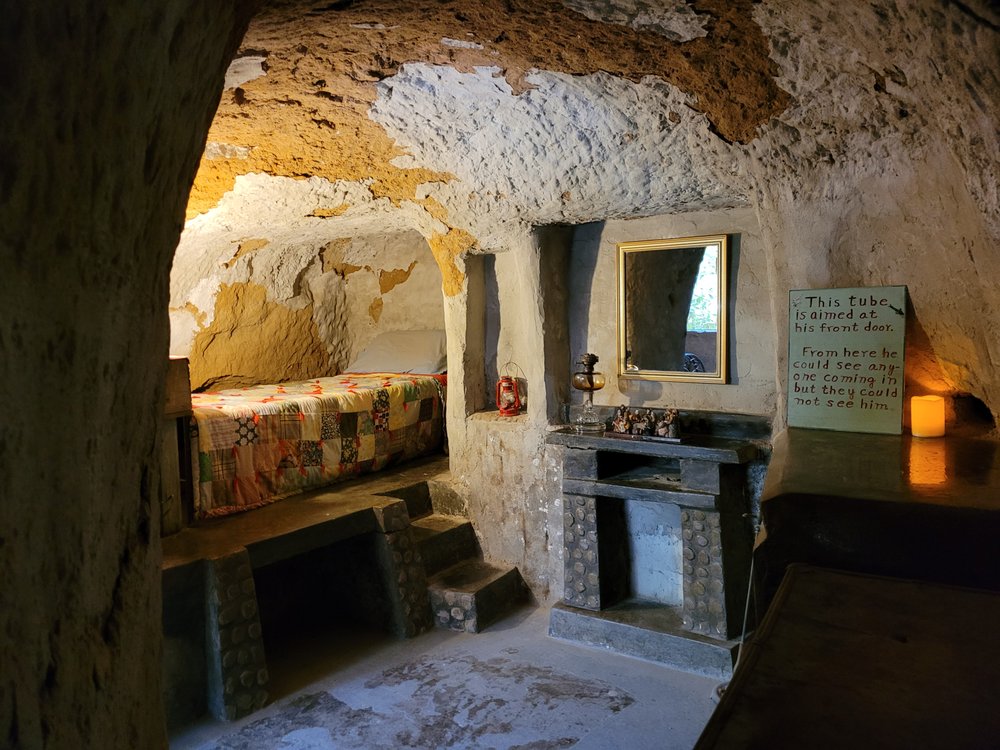 “A network of catacomb gardens!”

Fresno's best kept secret, The Forestiere Underground Gardens. Built over a century ago. A hand-built network of underground rooms, courtyards and passageways reminiscent of the ancient catacombs. Unique fruit producing trees, shrubs, and vines growing underground -- some over 90 years-old... -Ancient Roman architecture - arches, vaults and stone-built walls -Underground micro-climates -- temperature variations of 10 to 30 degrees -Underground home of Sicilian visionary and self-taught artist/builder Baldassare Forestiere The Underground Gardens are the life-long devotion and hobby of Baldassare Forestiere (1879-1946), a Sicilian immigrant who came to America in 1901 to escape the iron rule of his wealthy father and pursue his own dreams.  The Gardens are a subterranean complex of patios, grottos, and garden courts interconnecting with passageways that encircle the living quarters of the self-taught artist and builder who sought to escape the brutal heat of Fresno summers. Forestiere patterned his underground world after the ancient catacombs, which he so admired as a boy. Arches and passageways dominate the underground landscape while the stonework provides stability and beauty.  But unlike the dark catacombs that protected the remnants of the lifeless, Forestiere designed well-lit courtyards and grottos to bring forth the radiance and vitality of life. No plans were put on paper; each room and passageway originated in Forestiere’s mind as he worked.  With the simple tools of a farmer—a pick, a shovel, and a wheelbarrow—the young immigrant dug, chipped, and carved the unforgiving hardpan land for 40 years (1906-1946) in his spare time.  By the time he was 44 years-old, he had excavated and planted over 10 acres. But the humble immigrant’s genius did not stop there.  Incredibly, Forestiere planted multiple varieties of fruit-bearing plants at different underground levels.  Oranges, lemons, grapefruits—many on a single tree—as well as more unusual varieties like kumquat, loquat, jujube, strawberry, quince, and dates could be easily plucked from the surface by simply bending down.  Wine and table grapes also grace this sanctuary, and dangle lusciously in great clumps every-where---truly an oasis in a modern-day desert of pavement.

Reviewed by
Maribel A.

It was a great place to visit . Learned lots about the history of Fresno. I can't wait until I get to visit again. I would highly recommend it to friends and family . Read more

Went for a date outing and it was so fun and interesting to learn about! A good place for older kids and adults who are able to walk the more difficult areas. It was beautiful and the tour was... Read more

Reviewed by
Tena B.

Awesome to visit. Baldasare Forestiere spent 40 years digging underground tunnels and grottoes to escape the valley heat. He lived underground in the cool conditions. The tour is well worth it... Read more