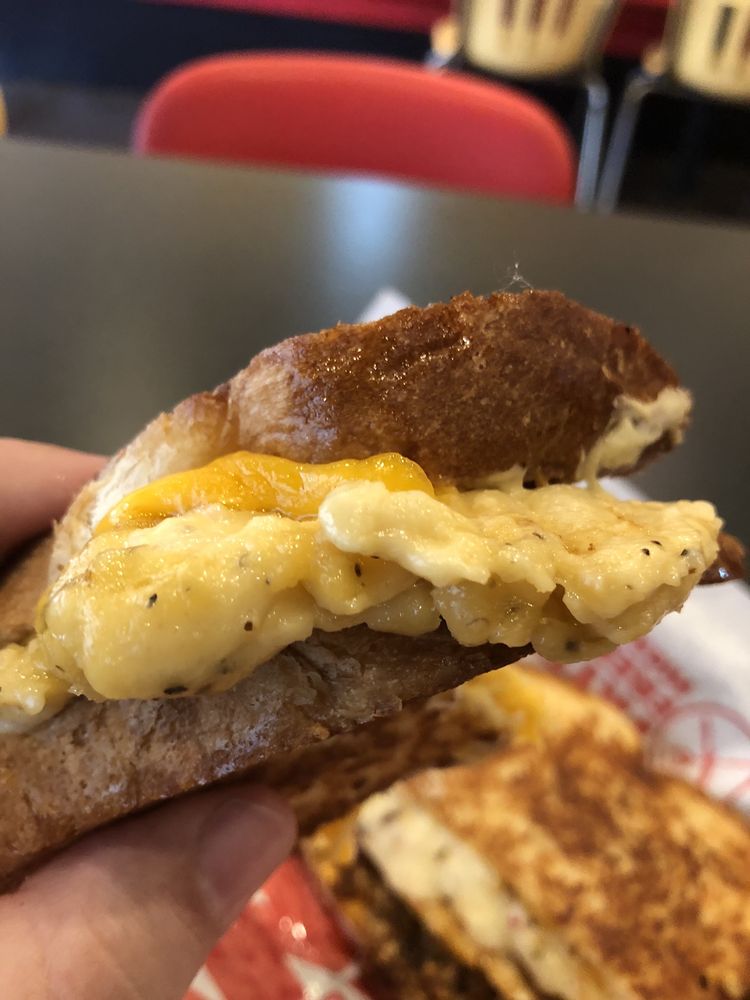 Tom+Chee began in a tent on a public square serving yummy grilled cheese and tasty soups to throngs of visitors. But the founders of Tom+Chee dreamed that one day they could have their own shop – their own little cheesy slice of the “American dream.” Because of our overwhelming success, 365 days later we opened our first brick and mortar location, and have been growing steadily ever since. Tom+Chee, “kitchen slang” for Tomato Soup and Grilled Cheese, features fresh-made creations – over 25 different ones on our daily menu and an endless “specials” menu. Choices range from good ol’ American cheese on white bread… to the fresh, herby flavors of the Pesto Turkey… to the unforgettable "Grilled Cheese Donut" (available with a variety of sweet and salty ingredients, a must-try!). Tom+Chee uses fresh ingredients, and we roast our own turkey, chicken, and beef, as well as making our own dressings, sauces, and spreads regularly in each shop. All of Tom+Chee's soups are homemade, and include three different tomato soups always on the menu, as well as seasonal specials, like gazpacho and blue cheese chili. Our salads are made fresh and also include seasonal varieties. For our friends with dietary restrictions we offer gluten-free bread, vegan cheese, as well as a variety of vegan and vegetarian soups (our pesto is nut allergy free!). Our food and our restaurants are designed with the whole family in mind – something for the kids and the kids at heart. A fun family feast that the young ones will eat, but with a diversity of choices that will satisfy parents’ cravings for something new or different. And for the price of just a sandwich at other places, you get a whole meal at Tom+Chee. Tom+Chee has earned a great deal of media attention, in Cincinnati and across the country. During an appearance on the season finale of ABC's "Shark Tank," Barbara Corcoran invested in the company, and the expansion of our franchise operations. Tom+Chee is currently featured in a weekly segment called ‘Franchise Fridays,’ on Fox Business network’s "MONEY with Melissa Francis." Our famous Grilled Cheese Donut has been featured on ABC's "The Chew," and the Travel Channel's "Amazing Eats," and "Man v. Food Nation." NBC's "Today Show" named it one of the seven best sandwiches of 2012. And our BBQ+Bacon Grilled Cheese sandwich was named "Best of the City" by Cincinnati Magazine. The band Smash Mouth included Tom+Chee in their cook book “Recipes From The Road,” and we've been written up in the national cheese magazine “Culture.” And Tom+Chee was named one of the "25 Brands to Watch" at the 2013 Brand Innovators Made in America Summit. Tom+Chee has been recognized locally, nationally, and internationally for our awesome flavor combinations, inspiring people to “Eat what's fun!” With a menu that fits in well for a quick workday lunch, a fun dinner out with the family, or a nighttime bite, we invite you to stop by and try something gooey, melty, and awesome.

Been interested in this place for awhile, and the other day the opportunity presented itself and I was starving so in I went. I expected Grilled Cheese and that's all, but they had many... Read more

I love Tom + Chee! Always intrigued by the concept but then they nail the execution and it's so affordable. PRO TIP - Order two half sandwiches as opposed to one whole one to try different... Read more

Reviewed by
Kristin B.

Excellent tomato soup and grilled sandwiches. A bit on the heavy side but their salads also look phenomenal. Quick and friendly service with very reasonable pricing. Worth stopping in for a quick... Read more