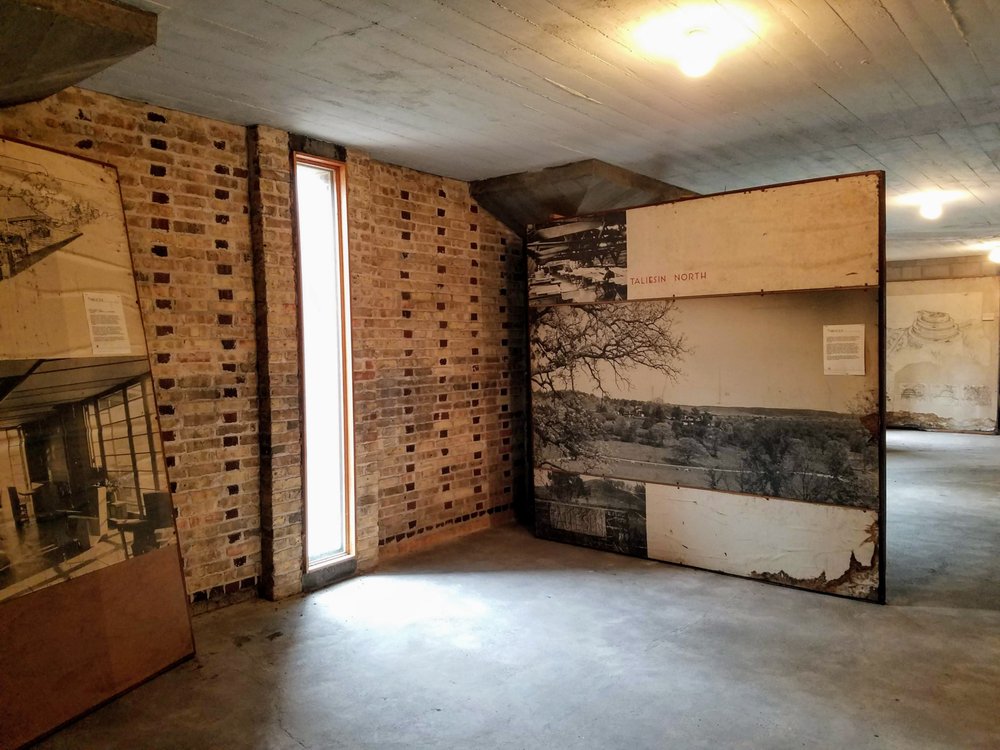 This massive red brick and concrete building would be impressive in any setting; it is especially so in the small Wisconsin town where Wright was born. Designed in 1915 and constructed between 1917 and 1921 for a local commodity wholesaler, Albert Dell German, the four-story warehouse was subsequently used to store sugar, flour, coffee, tobacco and other staples. More recently, it was modified to accommodate a gift shop and small theater on the first floor, and an exhibition of large photo murals which illustrate Wright's architectural work on the second floor. The Warehouse is one of only a few major public buildings designed by Wright during the midteens that was actually constructed. With the demolition of his Midway Gardens in Chicago and the Imperial Hotel in Tokyo, it has become the only extant example from that decade in which he employed sculptural ornamentation so extensively. The elaborate cast concrete frieze of repeated geometric motifs surrounding the upper portion of the The Warehouse foreshadows Wright's even more extensive integration of structure and ornament in the concrete block residences he designed in the 1920's. No Tours are available at this time - Drive-by only

I have to agree with Augie's review. I, also, am a fan of Frank Lloyd Wright's works, and I'm very glad we happened to be in town while the warehouse was open for tours. If the $15 tour cost helps... Read more

It's a bit difficult for me to review the Albert D German Warehouse. I'm a huge fan of Frank Lloyd Wright and have visited many of his homes. This warehouse is unique because it's one of FLW's... Read more

I dragged Chris to yet another FLW structure as we were staying at Candlewood Cabins just down the road. It was cold in the up stairs, so bring a jacket. The movie you saw does a great job of... Read more