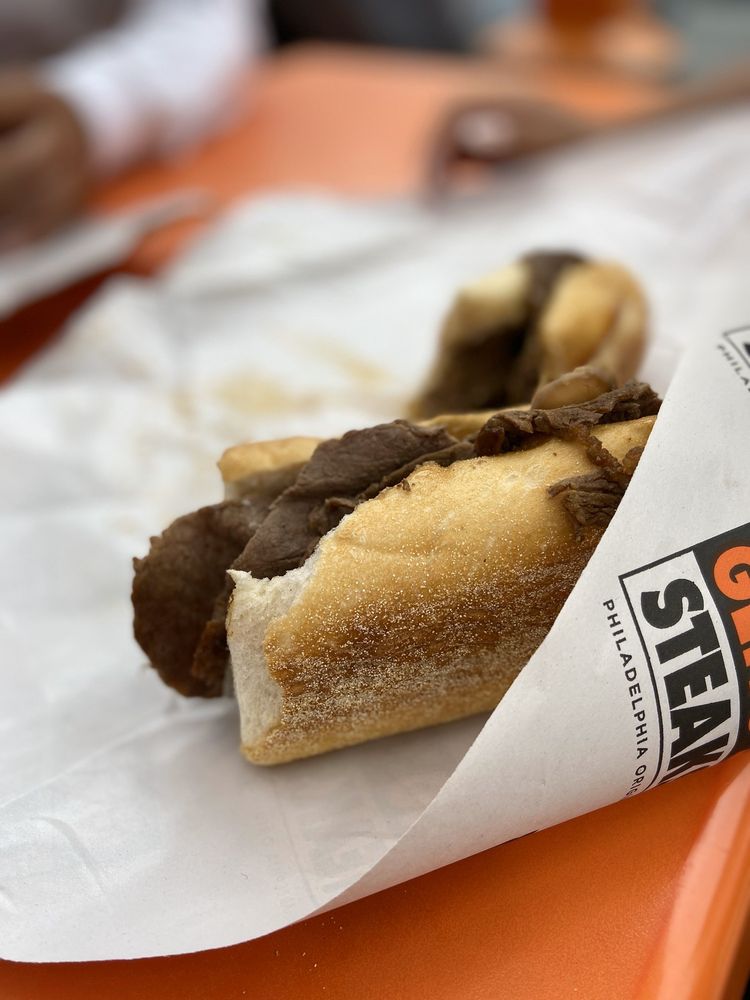 Geno's Steaks was started by Joe Vento back in 1966. He figured that if he was going to sell a steak, he had to be where they were already eating them....at the "X" shaped intersection of 9th & Passyunk in South Philadelphia. Joe learned the cheese steak business from his father who in the early 1940's opened "Jim's Steaks". In 1966, Joe started "Geno's" with $6.00 in his pocket, 2 boxes of steaks and some hot dogs.  His competitors all gave him six months to succeed and Joe laughed at them. As a twist of fate, there was already a Joe's Steak Place and Joe had to come up with a new name. He noticed a broken door in the back of his store on which a neighborhood boy by the name of "GINO" had painted his name. Joe liked the name but at that time, there was a food chain by that name and he did not want to confuse his business with that chain. So, he simply changed the "I" to "E" and decided to name his store GENO'S. In 1971, when their son was born, Joe and his wife Eileen decided to name him after their business. His son Geno works along with his father in a managerial capacity as well as handling many of the "behind the scene" tasks helping to make the business such a success. Since those days, Geno's has offered the best of cheese steaks.  The ingredients are simple, exacting and never greasy thinly sliced rib-eye steak, melted cheese, oven-fresh baked bread and delicately grilled onions. Awaiting your piping hot sandwich on the counter outside are ketchup, mustard, relish and Joe's choice hot sauce.  Be prepared and know how to order, because the service is fast and the line keeps moving. For example, on a cheese steak with onions specify which kind of cheese you'd like (Provolone, American or Cheese Whiz). By the time you have given your order, your money will be taken and your sandwich will be out the window nice and hot! At the next window you can pick up your soda, fries and coffee. Geno's is open 24 Hours a Day, 7 Days a week.  There is no indoor dining, but there are tables under canopies on the sidewalk for those who wish to enjoy sandwiches on the premises rather than drive off with them. Stop by when you're in town and see why Geno's Steaks has become a Philadelphia tradition.

What a scam!! It's the worst cheesesteak I ever had in my entire life. My husband and I decided to try Geno's before heading back to VA. We arrived around 8:30 PM it wasn't crazy crowded. The old... Read more

The famous Pat's and Geno's Rivalry haha! My cousins from Philly told me about these popular cheesesteaks. I watched an interview online about these two places and I guess the owners are actually... Read more