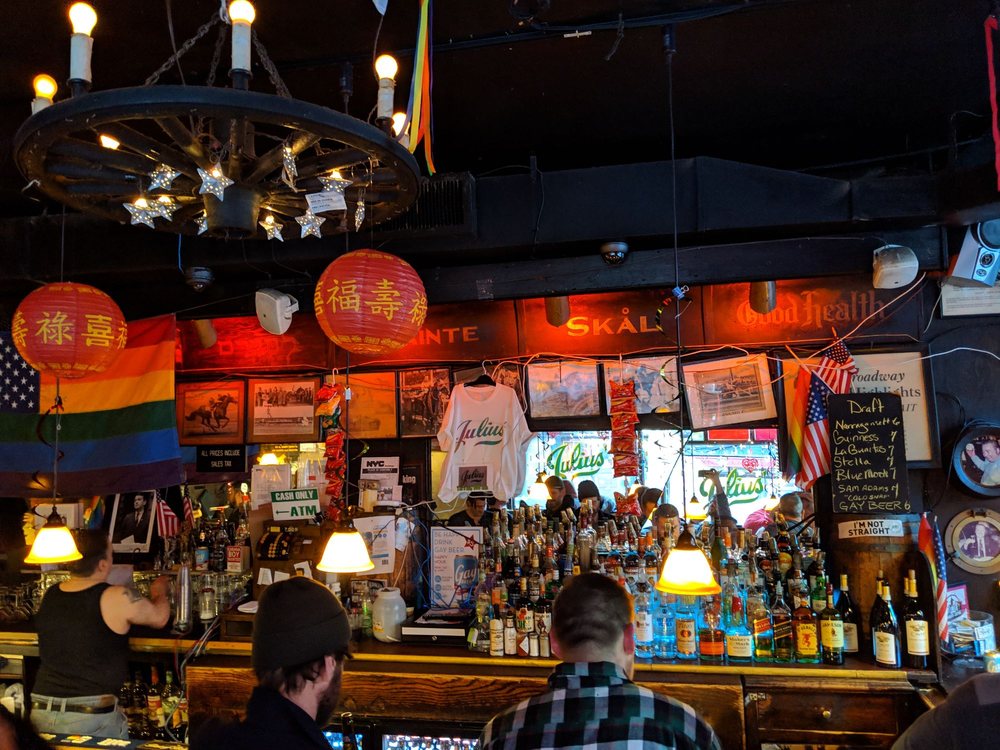 This structure has been welcoming folks since 1840, first as a grocery store and then, in 1864 as a bar.  It was built in 1826 on the corner of Amos Street (West 10th) and Factory Street (Waverly Place). During Prohbition it was a popular speakeasy and, along with Nick’s at the corner of Seventh Avenue South and the nearby Village Vanguard, was frequented by many of the jazz and literary legends of the era.  It started to attract a gay clientele in the 1950s and it is surely the oldest gay bar in the city and the oldest bar in the Village. Both Boys In The Band and Next Stop Greenwich Village were filmed here.  Enjoy your visit! On April 26, 1966, four homophile activists staged a “sip in” at Julius’ to challenge the NYS Liquor Authority’s regulation that prohibited bars and restaurants from serving homosexuals.  Accompanied by five reporters, the group visited a number of bars until they were denied service at Julius’, a longtime Greenwich Village gay bar.  The incident drew a denial from the SLA chairman that his agency told bars not to serve homosexuals and precipitated an investigation by the chairman of the city’s Human Right’s Commission

This bar is an iconic gay bar - the problem is this place has really fallen apart - the bar staff are rude and it's hard to get served - the food service guy is nice - and their range of tap beer... Read more

LOVE THIS PLACE! Throughout 2020 until present, my husband & I would walk down to the Village with our dogs to eat & drink here on their outdoor tables. It is located at a lovely corner and fun... Read more

7 years in manhattan and STILL this place constantly nails it. I'm bartender myself, and I know what I'm looking for when I visit a dive, and Nick treated me well and the chef on hand I think... Read more