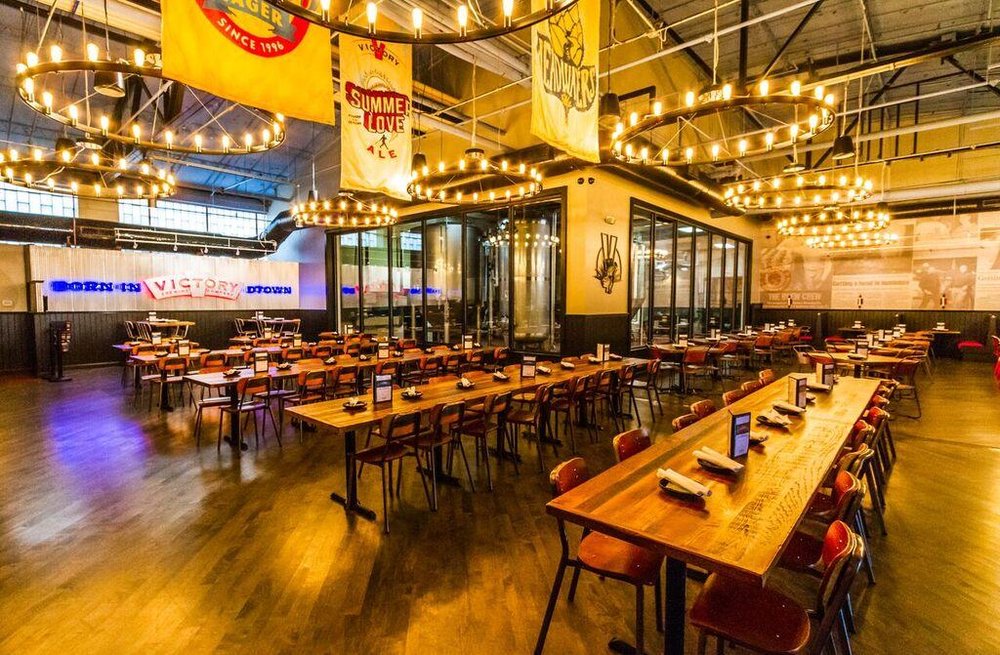 Victory Brewing Company is a privately held microbrewery headquartered in Downingtown, Pennsylvania. Begun by Bill Covaleski and Ron Barchet, childhood friends who met on a school bus in 1973, the brewery formally began operations in February of 1996. Victory, Pennsylvania’s widely acclaimed brewery and restaurant, now serves fans of fully flavored beers in 29 states with innovative beers melding European ingredients and technology with American creativity. At Victory we believe that the very best ingredients are necessary in order to brew the very best beer. Here, German malted barley, a mix of European and American whole flower hops, 45 unique yeast strains (for our wide variety of beers), and the highest quality local water is blended to create our refined brews. Note: Victory is one of only a few breweries in the country that uses whole flower hops. While almost all other breweries used pelletized hops, Bill and Ron insist on using the whole-flower varieties. This unprocessed form of hops imparts better flavor and aroma to beer. Every brew begins with malt preparation. Victory’s imported German malts are first brought into the brewhouse via a conveyer system from our silo house. At that point the malt is sifted to ensure outside particles are taken out. The malt is then immediately sent to the wet mill. This wet-milling process softens the malt allowing us to remove the barley husk from the kernel with less breakage. The intact husks produce sweeter wort and yield less tannic bitterness than their broken counterparts. The softened malt is transferred to the mash tun where it is mixed, activating enzymes which change the malt starches into simpler sugars. From there, the resulting mash is transferred to the lauter tun. The lauter tun acts as a strainer, separating the sugar and nutrient-rich wort (the liquid that will become beer) from the spent barley malt. The fresh wort moves to the brew kettles where the European and American whole flower hops are added to produce unique flavors and enticing aromas. After a specified time, the hops are removed, and a whirlpool is used to sift out any remaining hop particles before the hopped wort is sent to the “cellar” where fermenting occurs.

Very fine brewery, beers are top notch, but as a restaurant I'm afraid they're a victim of their own success. Food was meh, service less than that. Ate with my family of 5, ordered simple tavern... Read more

Victory Brewing's Golden Monkey is my brother-in-law's all time favorite beer. We're from California so it's hard to find Golden Monkey around here. However when I was living in San Diego, oddly... Read more

Reviewed by
Catherine B.

5 star experience but 4 stars for the food. Celebrated a birthday and got rewards on the app. Menu options are smaller than I remember Nachos: 3/5 really love this style of chip, but wish... Read more