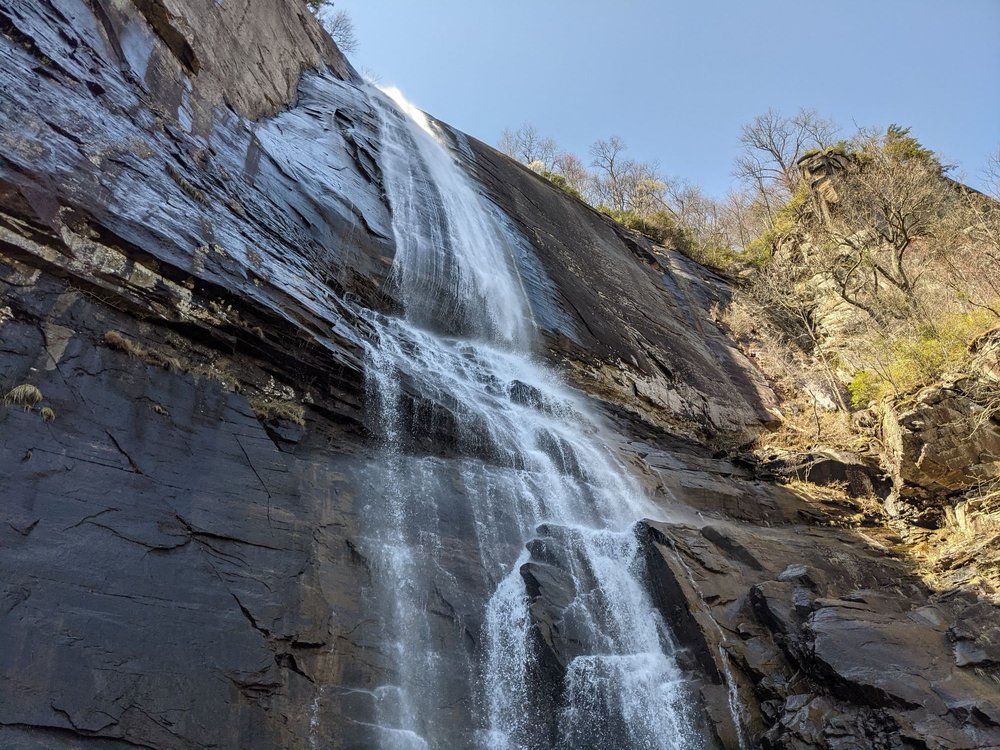 “A most Unusual Formation!”

North Carolina has some pretty incredible scenery, and the best way to view it all is to head to Chimney Rock State Park, just outside the cozy little town of Asheville. Chimney Rock State Park's main attraction is the magnificent, 315-foot mountain formation that givevs the park its name. The 25-minute hike to the top along the Outcroppings Trail (also known as the "Ultimate Stairmaster") contains 491 steps, but the effort is all worth it once you reach the peak, called Exclamation Point (so punny!), and take in the breathtaking views-- you can see 75 miles of pure Blue Ridge beauty. The rock also hides a secret 26-story elevator inside, in case you're not up for the hike but don't want to miss the scenery.  The park also contains the impressive 404-foot Hickory Falls, in case you want to cool off in its refreshing mist after conquering the Ultimate Stairmaster, and guided rock climbing. It's also home to Grady the adorable Groundhog and Gneiss Cave, which is notorious for its purported history of moonshine production. And, movie buffs may recognize the landscape from the film adaptation of The Last of the Mohicans. Forgot to pack a lunch? No sweat! There are a few places to grab a sandwich, a drink, or an ice cream (you deserve it!) inside the park as well. They've got everything you need for a perfect outdoors adventure- fresh mountain air included! -Roadtrippers Attn: Hours for Chimney Rock State Park may may vary depending on what time you visit:  January - February: 8:00 a.m. to 6:00 p.m. March - April: 8:00 a.m. to 8:00 p.m. May - August: 8:00 a.m. to 9:00 p.m. September - October: 8:00 a.m. to 8:00 p.m. November - December: 8:00 a.m. to 6:00 p.m. Closed December 25, Christmas Day In 2005, the N.C. General Assembly authorized a new state park in the scenic Hickory Nut Gorge area of western Rutherford and the surrounding counties of Polk, Henderson and Buncombe. Later that year, the first tract of land to form the state park was purchased. Since then many more acres have been added. The most notable was the 2007 transfer of Chimney Rock Park, a private nature park surrounding the striking 315-foot spire on the gorge's southern side, into the expanding park. The daily services offered to visitors of the Chimney Rock Access of the state park are provided by a private contract managed by the Division of Parks and Recreation. This section is open year round with the exception of Thanksgiving Day and Christmas Day. Entry fees offset the cost of operating this popular tourist destination. Currently, Chimney Rock and the Rumbling Bald Climbing Access are the only public accesses within Chimney Rock State Park. However, the N.C. Division of Parks and Recreation will eventually develop other areas of the state park with facilities and recreation traditionally enjoyed in our Western North Carolina state parks. The greater Chimney Rock State Park currently encompasses roughly 5,700 acres on both the north and south sides of the gorge and expansion efforts continue to bring more of the gorge's rich natural resources into conservation. Chimney Rock at Chimney Rock State Park has been a tourist destination in western North Carolina since a simple stairway was built to the rock's summit in 1885. In 1902, Lucius B. Morse of Missouri bought the site. The Morse family developed park facilities including a tunnel and elevator to the rock summit, nature center and a network of hiking trails to geologic points of interest including the 404-foot-tall Hickory Nut Falls.

Beautiful scenic views from this park. They have a lot of facilities (bathrooms, cafe and a store). Enjoyed the hike to Chimney Rock and the waterfalls. Read more

This state park is tucked away in a small town with a beautiful esthetic. The view heading to the parking lot is beautiful some of turns are tight so just keep a look out. Once we parked my... Read more

We visited in mid-January, and there were several other families and guests. But that was it - just several! It was wide open, and every view is gorgeous. Some things to note - in the winter the... Read more