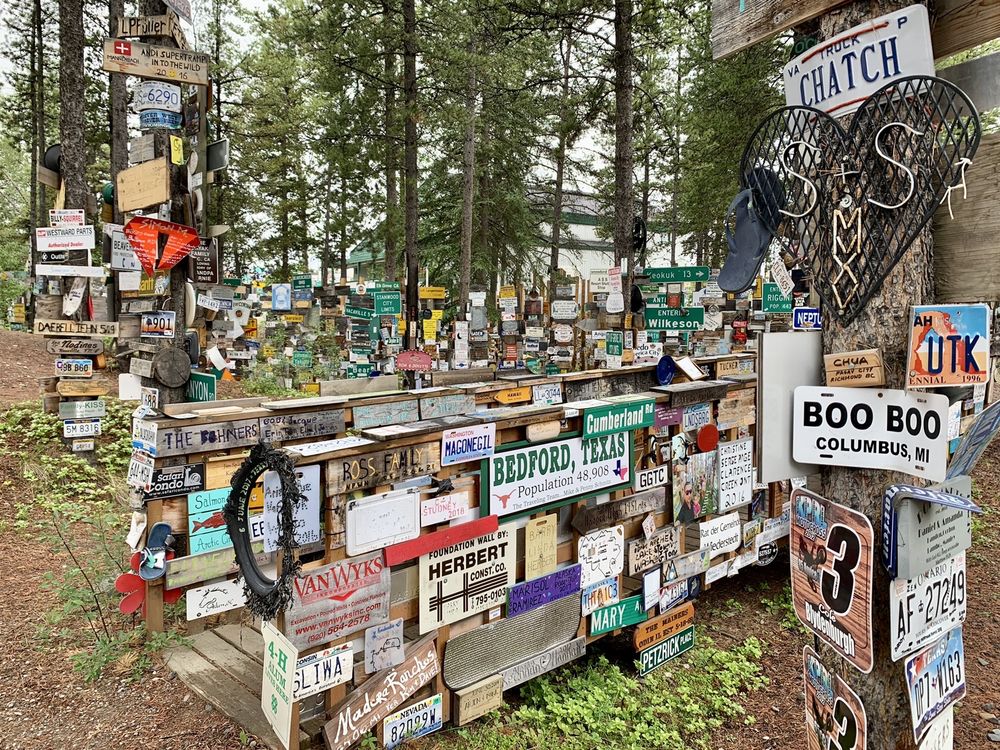 Sign Post Forest is a collection of signs at Watson Lake, Yukon and is one of the most famous of the landmarks along the Alaska Highway. It was started by a homesick GI in 1942. Visitors may add their own signs to the 100,000 already present. In 1942, a simple signpost pointing out the distances to various points along the tote road being built was damaged by a bulldozer. Private Carl K. Lindley, serving with the 341st Engineers, was ordered to repair the sign, and decided to personalize the job by adding a sign pointing towards his home town, Danville, Illinois, and giving the distance to it.  Several other people added directions to their home towns, and the idea has been snowballing ever since. The Sign Post Forest takes up a couple of acres, with huge new panels being constantly added, snaking through the trees. There are street signs, welcome signs, signatures on dinner plates, and license plates from around the world. In June 2012 the stage in the center of the forest was the site of an impromptu performance of the play Two Women on a Precipice. The playwright Karin Fazio Littlefield was delayed in attending the Last Frontier Theatre Conference in Valdez, Alaska by mudslides on the Alaska Highway. Littlefield and her fellow actors performed the piece for travelers who were likewise stranded in Watson Lake by the mudslides.

This is one of the neatest tourist spot along the Alaskan Highway. You could easily spend several hours there going over 73,000 signs brought from all over the world by tourist. Read more

So cool and so much fun!! This is an amazing place to stop and visit. Look for a city you know and love! Read more

Reviewed by
Seth A.

I returned to Sign Post Forest here in Watson Lake, Yukon Territory, Canada. Welp, it was actually on my ALCAN (Alaska/Canada) Highway drive back to the Lower 48 states of the USA. But...I... Read more