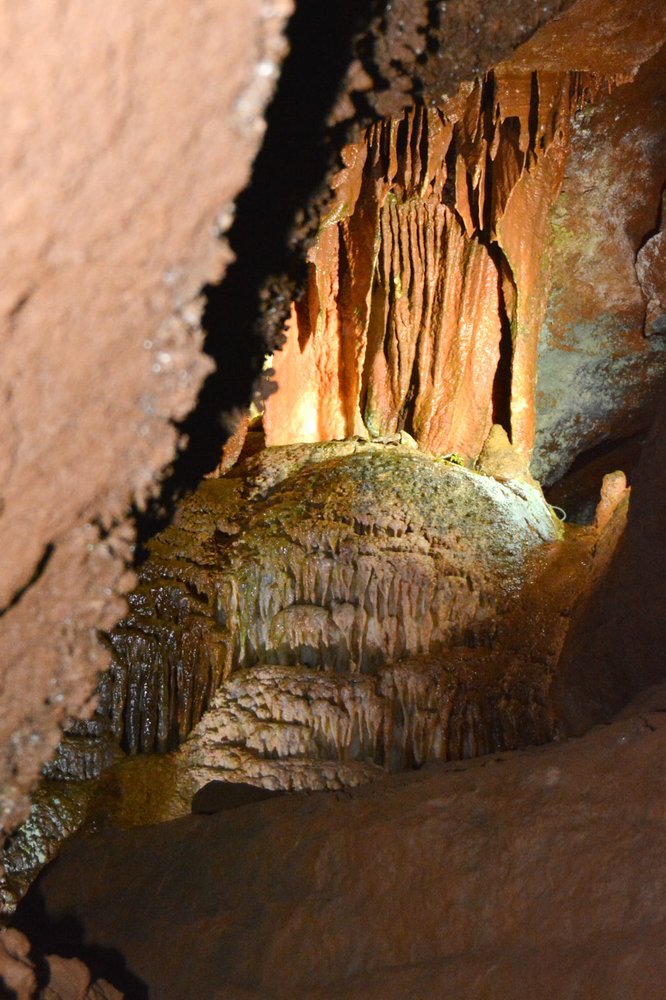 To the untrained eye, the state of Tennessee appears to be landlocked. However, hidden in a beautiful, remote cave system is the world's second-largest non-subglacial underground lake, so large it's been named The Lost Sea. The visible surface of the lake is 800 feet by 220 feet (on average, when there isn't a drought or anything) but below the water are even more caverns and rooms, entirely submerged. In fact, divers were unable to find the end of the caves during a 1970s exploration mission. The Lost Sea is located within Craighead Caverns, an extensive system of caverns first used by Cherokee Indians as a meeting place-- in fact, they got their name from Chief Craighead. During the Civil War, Confederate soldiers mined the caves for saltpeter to make gunpowder, and between 1939 and 1940, a mushroom farm was operated in Craighead's Big Room. Also in 1939, a rare and very large Pleistocene jaguar skeleton was discovered inside, and the bones were removed and sent off to theAmerican Museum of Natural History. In 1947, someone decided that the Big Room would make a better nightclub than a mushroom farm and put in a bar and a wooden dance floor-- thus the "Cavern Tavern" was born. Despite the fact that "Cavern Tavern" is a cool name and the crazy-awesome acoustics for the live band, this proved to be a very bad idea; as you can imagine, alcohol and steep cave staircases don't mix well, and after several injuries the operation was shut down. The cave was also used for cockfights and moonshine distilling-- this is Tennessee, after all. The Lost Sea wasn't discovered until 1905. It was a 13-year-old kid named Ben Sands who made the find. As the story goes, he spent a lot of time playing in the caves, and crawled into a small hole he happened upon. It led to another room so vast that he couldn't see the other side from the light of his lantern, so he tossed mud and rocks into the darkness to try and find the opposite wall-- instead of hitting a stone wall, the mud and rocks landed in the wate with a splash. When he tried to show is father his discovery a few days later, the water level had risen, hiding the entrance to the lake. It wasn't until a few years later that it was rediscovered. Today, you don't have to crawl through any tiny openings to visit it. The Lost Sea Adventure offer several tours, including a rad boat ride on the Lost Sea and an overnight stay. -Roadtrippers Your Lost Sea adventure begins with a guided tour of the caverns. This involves a ¾ mile round-trip walk on wide sloping pathways. While touring the caverns and underground lake our guides will tell of the cavern's exciting and colorful history. They will also explain the fascinating geological development of the immense cavern rooms and rare formations. At the bottom of the cave you will board a glass-bottom boat for an exciting trip on the Lost Sea, America's Largest underground lake.

I came here with my great aunt(70+) and cousin(17). I haven't been since I was a child, probably 20 plus years ago, so I vaguely remember that visit, it was nice to experience it again as an... Read more

We traveled up to the Lost Sea in Sweetwater, Tennessee, which has the second largest underground lake in the world! I thought just SEEING this turquoise lake and taking a boat ride in a cave... Read more

Great adventure. It was great to visit the cave and the lake which is the only underground lake in the US. Out tour guide, Jess, was exceptional. She clearly loved her job and reaching visitors... Read more