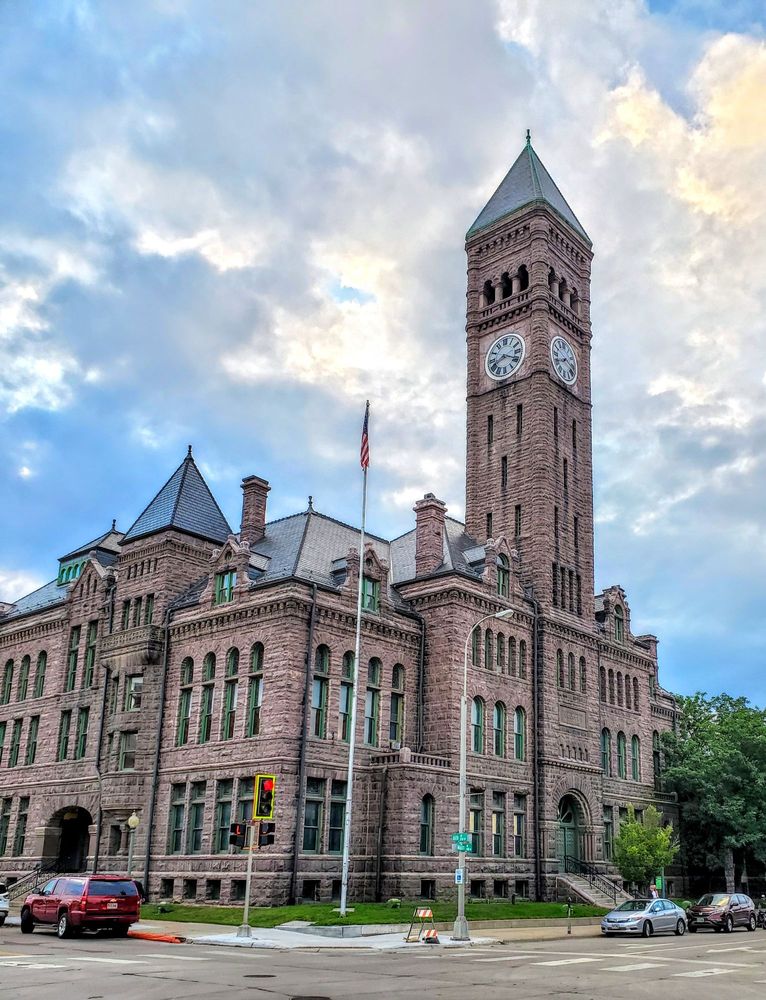 “A step into history”

Construction began on the first Minnehaha County Courthouse in 1889.   The building is a product of local architect Wallace L. Dow, who designed many local buildings including the South Dakota State Penitentiary, the All Saints School, and the Thomas B. McMartin home (now the Pettigrew Home and Museum).  The building is constructed of native Sioux Quartzite stone, a popular local building material of the late 19th century.  When completed in 1893, Dow claimed the structure would be the “largest courthouse between Chicago and Denver.” Interior courthouse features include slate stairs, granite pillars, stained glass windows, and tiled fireplaces.  Perhaps one of the most striking features of the building is the 16 large murals on the walls of the hallways painted between 1915 and 1917.  Painted by Norwegian immigrant Ole Running, the murals detail early life in Dakota, natural features, and images of his home in Norway.  Running was paid $500 for his work on the walls of the building. The courthouse was used for county business until 1962, when it became too small for court and administrative activities.  A new courthouse was built to the west of the original and the Old Courthouse was slated for demolition to make room for a parking lot.  Concerned citizens campaigned to save the Old Courthouse and in 1974 they were successful.  The building was converted to a museum and joined with the Pettigrew Home and Museum to become the Siouxland Heritage Museums. Today, you can visit three floors of public exhibit space that provide a colorful look at the region’s history.  The second floor features the restored circuit courtroom and law library.  Admission to the building is FREE!

This museum is housed in the very beautiful native quartzite Courthouse building. It is beautifully restored and has many historical displays inside, a beautiful ballroom and a room filled with... Read more

The museum is a beautiful structure and is located in the old Courthouse (as you can tell by the name). There are a lot of features of the building itself that are maintained in its original... Read more

Pretty neat! We stopped in Sioux Falls for a night and wanted things to do. We found this. It's neat if you're into history! It need a bit more well kept but as a museum, 10/10 job well done! Read more