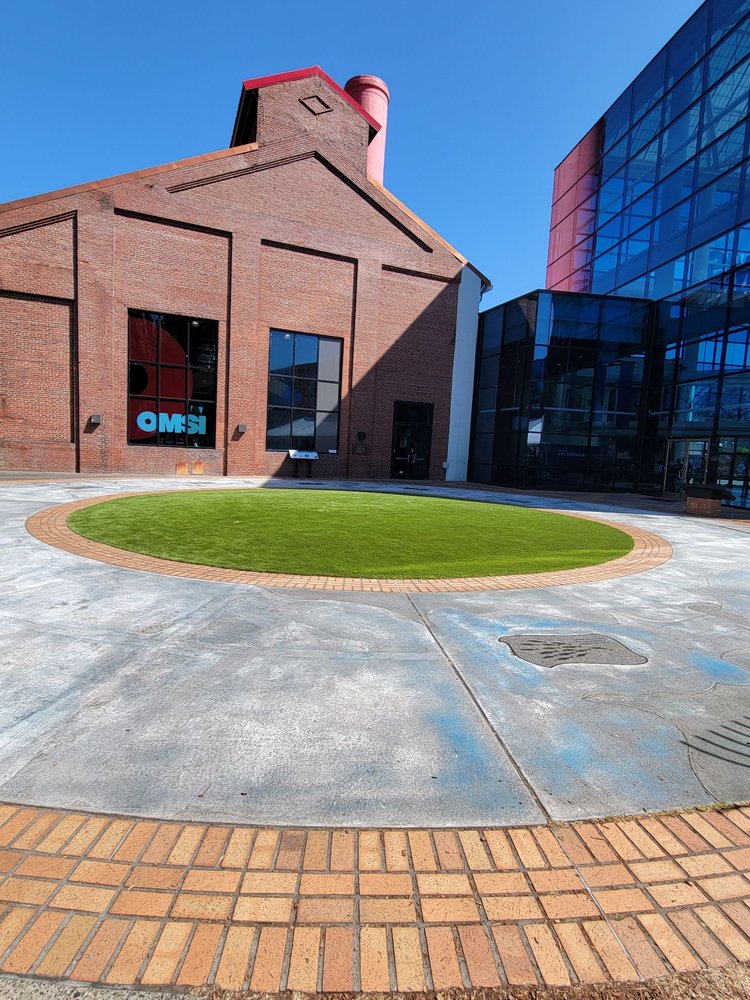 The Oregon Museum of Science and Industry (OMSI) is a scientific, educational, and cultural resource center dedicated to improving the public's understanding of science and technology. OMSI makes science exciting and relevant through exhibits, programs, and experiences that are presented in an entertaining and participatory fashion. Beginning in 1903, odd artifacts were displayed in hallways and alcoves in Portland City Hall arranged by Colonel L. L. Hawkins. When the collection was evicted in 1936, about 12,000 artifacts were stored throughout the city. On November 5, 1944, the Oregon Museum Foundation was founded with the mission of establishing an Oregon Museum of History, Science, and Industry. It displayed its first collection of natural history objects at the Portland Hotel. Subsequent small exhibits occurred around town to generate interest and donations. In 1949, a house at 908 NE Hassalo was donated to establish the museum. Within a year, the Pacific Northwest's first public planetarium opened in a dome on the front lawn. By 1955, OMSI's annual attendance had grown to 25,000. The need for expansion led to volunteers building a new site at Washington Park, completing the original goal of a hands-on museum. (That building is now occupied by the Portland Children's Museum.) This opened to the public on August 3, 1958, following a formal dedication by the governor on June 7. A planetarium was again included. The new building at the southwest corner of what was then Hoyt Park (now part of Washington Park) was located adjacent to the then-new site of the Portland Zoo (now the Oregon Zoo), which began a one-year phased move in the same month as the new OMSI opened. The two attractions remained neighbors, sharing a parking lot, until 1992. By the mid-1980s, 600,000 people per year were visiting the building, which was designed for only 100,000. Expansion at the Washington Park site was deemed infeasible, and in 1986 it was announced that the museum would move to a new location on the east bank of the Willamette River, where a much larger building would be constructed. Property that included the historic Station L power plant was donated by Portland General Electric, and building construction was paid for by a fundraising campaign. In 1992, OMSI opened at the new site, which continues to be the current location. The construction integrated the existing PGE turbine building and included the creation of a 330-seat OMNIMAX theater. The facility also includes a 200-seat planetarium with Digistar 3 technology. In 2004 the Turbine Hall was closed from September through November for renovations in which the Discovery Space and Technology Lab changed places and a new Inventors Ballroom was added. Also added were a small stage area for public exhibit demonstrations and a bridge connecting a new metal staircase with the mezzanine exhibits. The museum started planning for an expansion of the facility in 2006. In 2008, OMSI began finalizing the plans for the expansion, which was estimated to cost about $500 million and would double the size of the museum. They began working to secure the funds for the expansion the next year, but decided to hold off on the plans in 2010 after the poor economy had made it difficult to try and raise funds for the project. The OMNIMAX dome theater closed in September 2013 for conversion into a conventional flat-screen movie theater that is not IMAX but still has an extra-large screen, about four stories tall. Renamed the Empirical Theater, it reopened in December 2013.

I really only came here for the subamrine tour but as I arrived an hour before the next tour started, I bought a general admission ticket to OMSI and to the Da Vinci exhibit, which amounted to a... Read more

Reviewed by
Steve B.

Worst Science Center Ever. Half the exhibits are closed or broken, there's an incredibly long wait to get in, the space hall is seriously lacking in content, and there's a Marvel Super Heroes... Read more

Being an engineer, I enjoy all types of science and industry exhibits. The Oregon Museum of Science and Industry complex in Portland includes a theater with a four-story screen, a planetarium, a... Read more

Oregon Museum of Science and Industry