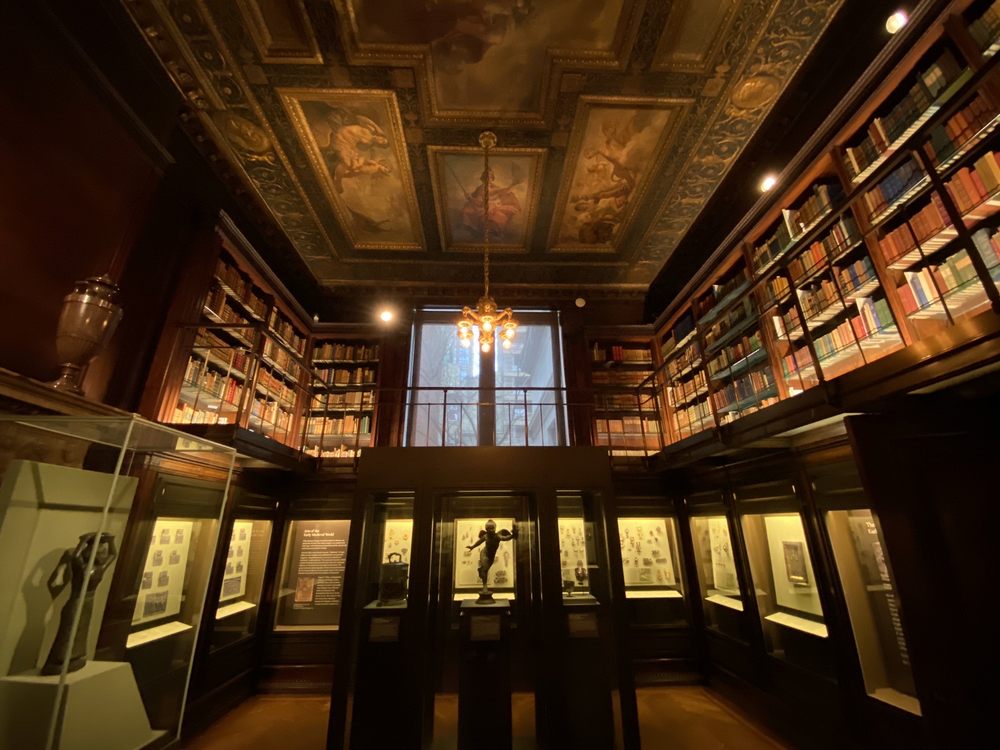 The outside may not look like much, but the inside of New York City's Morgan Library and Museum is like something you'd find in a much-older European town, not exactly the city that brought the world Sbarro Pizza and Donald Trump... but it's right in the heart of the Big Apple. It was originally the private collection of super-rich banker J.P. Morgan, and it houses art, rare books (hello, original Gutenberg Bible), plus rotation exhibits and installations. It was built between 1902 and 1906, but it wasn't until 1924 that his son, Jack, realized that he was sitting on a collection that was too important to remain private-- everyone should be able to have access to the many rare items his father had acquired.  Included in the library are old illuminated manuscripts, original works by Mozart, Thoreau's journals, Rembrandt etchings, a Dickens manuscript of A Christmas Carol, plus letters from countless historical figures ranging from Jane Austen and Albert Einstein to Abraham Lincoln and John Steinbeck. There are treasures from Egypt, Rome, Mesopotamia, the Middle Ages, The Qing Dynasty, the Renaissance, and more. Seriously, how is this place not world-famous??? All that, plus the really unique rotating installations and exhibits are totally cool, but the 1906 library is definitely the main attraction. The whole room is lavishly decorated, from floor to ceiling. It was recently restored to its former glory, complete with period antiques and the three original chandeliers...plus all the paintings, murals and mosaics were cleaned and new artifacts were put on display. It's breathtaking, and almost overwhelming how much there is to look at-- I just want to Instagram the crap out of it! -Roadtrippers Just a short walk from Grand Central and Penn Station, the Morgan is a major exhibition venue for fine art, literature, and music, one of New York's great historic sites, and a wonderful place to dine, shop, and attend a concert or film. In 1924 J. P. Morgan, Jr. gave his father's extraordinary library to the public. The most influential financier in this country's history, Pierpont Morgan was also a voracious collector. He bought on an astonishing scale, collecting art objects in virtually every medium, including the rare books, manuscripts, drawings, prints, and ancient artifacts that are the core of The Morgan Library & Museum's holdings. The mission of The Morgan Library & Museum is to preserve, build, study, present, and interpret a collection of extraordinary quality, in order to stimulate enjoyment, excite the imagination, advance learning, and nurture creativity. A global institution focused on the European and American traditions, the Morgan houses one of the world's foremost collections of manuscripts, rare books, music, drawings, and ancient and other works of art. These holdings, which represent the legacy of Pierpont Morgan and numerous later benefactors, comprise a unique and dynamic record of civilization, as well as an incomparable repository of ideas and of the creative process.

Absolutely beautiful and interesting! Definitely worth the visit. I reserved my tickets online. I went right when it opened on a weekday, and it was nice and not too crowded. I felt comfortable... Read more

Pros: - This is one of my favorite cultural landmarks in NYC, overall a breathtaking experience and a must-do for tourists - Love sitting in the cafe sitting area, so serene Cons: - Do NOT get... Read more

The Morgan Library is beautiful. The library & museum belong to J.P Morgan's family. The highlight is at the back and is a historic gallery of what J.P. Morgan's family value. Their home library/... Read more