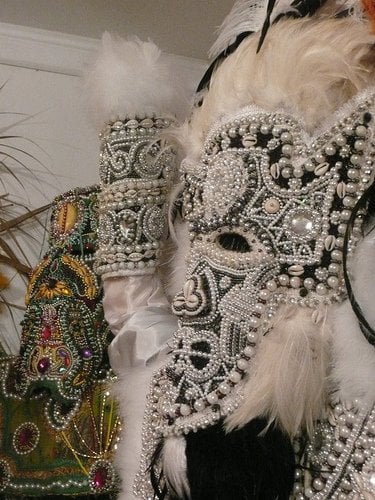 The mission of the Backstreet Cultural Museum is to preserve and perpetuate the unique cultural traditions of New Orleans' African American society through collections, exhibitions and publications, public programs, and performances. These cultural traditions include Mardi Gras Indians, Skull and Bone gangs, Baby Dolls, jazz funerals, social aid and pleasure clubs, and other related activities, rituals and celebrations. The vision of the Backstreet Cultural Museum is to foster the appreciation of New Orleans’ African American processional traditions as important to American history and contemporary visual culture. The Backstreet Cultural Museum is a gathering place of memory, celebration, and communion that uses art and culture to enrich and sustain its community. The Backstreet Cultural Museum officially opened its doors in 1999. However, its origins can be traced back three decades to when Sylvester Francis paraded with the Gentlemen of Leisure Social Aid & Pleasure Club.  A man photographing the parade wanted Francis to pay $35.00 for his own photograph. To avoid such costs in the future, Francis bought both a Super 8 mm camera and a still camera and began documenting Carnival celebrations,second-line parades, and jazz funerals throughout New Orleans.

A must stop when visiting New Orleans. This museum has so much culture and not to mention all the beads. Absolutely beautiful "Indian" costumes all hand beaded in intricate designs. You just have... Read more

I am so glad we took a chance and walked by here, even though the website said it was only open by appointment. The guide was sitting on the stoop, and invited us in. This was SUCH an informative... Read more

Walking into the unassuming building that houses the Backstreet Cultural Museum, you can immediately tell that you're in a place of importance. From the moment you enter, photographs and... Read more

I love taking out-of-towners here to get a sense of the time and effort that locals take to bring Mardi Gras to the masses. The museum exhibits are all handmade costumes for Mardi Gras Indians, Baby Dolls and Social & Pleasure Clubs. The guide's stories and historical insights are great but I had to act as translator at times – the accents take some getting used to! Another bonus is that St. Augustine Church is just across the street with the grave of the Unknown Slave. Read more