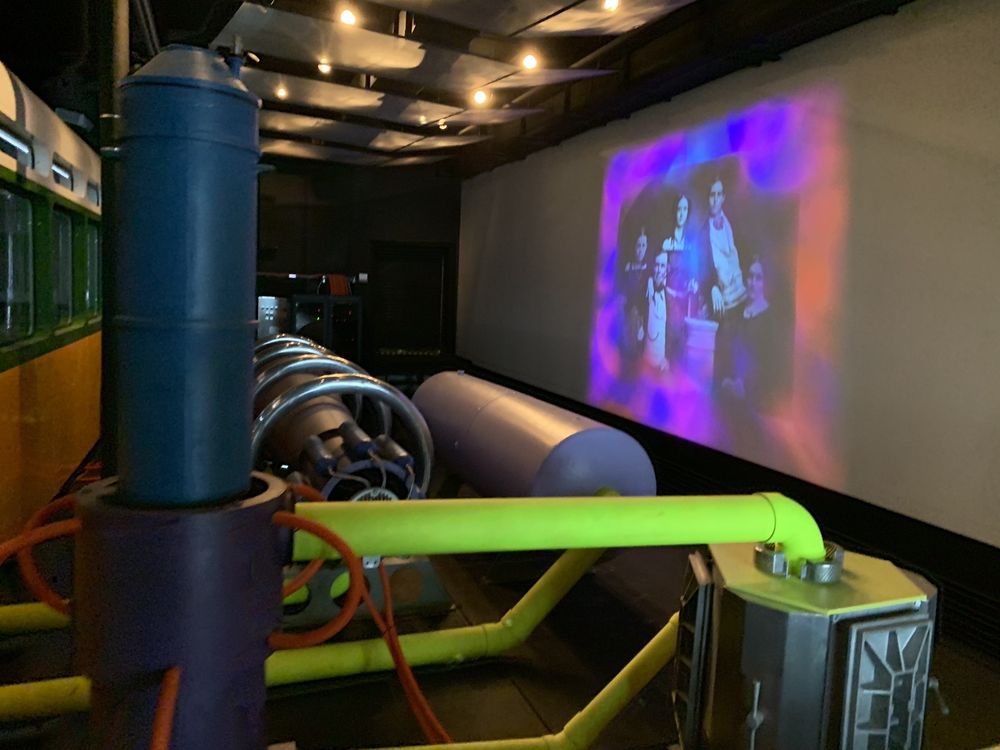 “tells the story of the early civil rights soldiers”

The purpose of the Rosa Parks Museum is to uphold and interpret for the public benefit, education and enjoyment, materials related to the events and accomplishments of individuals associated with Montgomery Bus Boycott. The Museum includes a permanent exhibit, a time machine, temporary exhibit space, archives, classrooms, an auditorium and conference room. The Museum is a major landmark in the revitalization of downtown Montgomery constructed on the site of the old Empire Theatre where Mrs. Parks made her courageous and historic stand in 1955. The interpretive museum occupies the first floor and 7,000 square feet of a three-story, 55,000 square foot building that also contains the TROY-Montgomery Campus Library. It includes space for permanent and special exhibits as well as a 103-seat, 2200 square foot multimedia auditorium. In a non-violent and non-threatening manner, six distinct and unique areas inside the museum tell the story of bravery and courage of early civil rights soldiers. In the Rosa Parks Library & Museum Children’s Wing, visitors go back in time on the Cleveland Avenue Time Machine to discover that things just don't happen – people make things happen. Visitors come to realize that they, too, can make a difference just as Rosa Parks, E.D. Nixon, Jo Ann Robinson, Fred Gray, Claudette Colvin and many others made a difference following in the footsteps of Dred Scott, Harriet Tubman, Homer Plessy and others who had gone on before. As visitors enter the Cleveland Avenue Time Machine, they see what they think is a standard 1955 Montgomery city bus. On closer inspection they discover the vehicle has no wheels and indeed appears to be floating above a layer of violet-colored light. The vehicle is surrounded by a strange array of imposing equipment, lighting effects, glowing pipes and low fog. On one side of the vehicle, huge Time Diodes are ready to trigger Time Travel. On the other side, a similarly imposing sequence of equipment represents the collection and acceleration of “Tachyons” to power the Time Diodes. The strange machineries of time travel emit pulsing light in random patterns as though their circuitry has somehow been damaged by fast traveling Tachyons. The effect is designed to make guests sense that huge energies might be under somewhat imperfect control. Strange and very low frequency audio effects envelop the space. Surrounding walls seem to be undulating in colorful abstract patterns as images from all eras of history drift by. Cloud ceiling lighting fires in random patterns as though it is heat lightning. These effects occur prior to and after the program. Strange and very low frequency audio effects envelop the space. Guests approach the bus entrance door along a railed walkway. They enter the bus and meet the driver, a curious assemblage of engine parts. His eyes are glowing and light is pulsing along his limbs. His name is Mr. Rivets and he greets visitors in a strange mechanical voice. Visitors are transported through time from to the early 1800’s to the early “Jim Crow” era where they observe scenes of segregation and social and legal challenges made by individuals like Harriet Tubman, Dred Scott and Homer Plessy. Visitors also learn about the various legal challenges that helped reshape the thinking of the 20th century that discrimination and segregation were both immoral and illegal. Upon returning back through time to Montgomery, Alabama, visitors are encouraged to visit the second floor Research Center, where they can learn much more about the legal and social challenges involving a segregated bus system in Montgomery, Alabama. In addition, visitors can view numerous historical documents and hear testimonials of men and women who actually participated in the Montgomery Bus Boycott in 1955 and 1956.

A must see! The displays and videos were amazing. I learned so much & wish everyone could go here. First class museum! Read more

This Museum is located across from the Troy campus. It is co-located with a library that is only accesible to Troy students. They have metered street parking right out front and within a... Read more

This museum is two parts - our family of five just did the museum experience. We had to wait for it to be go in as there are timed small experiences for the first part. This was really just an... Read more