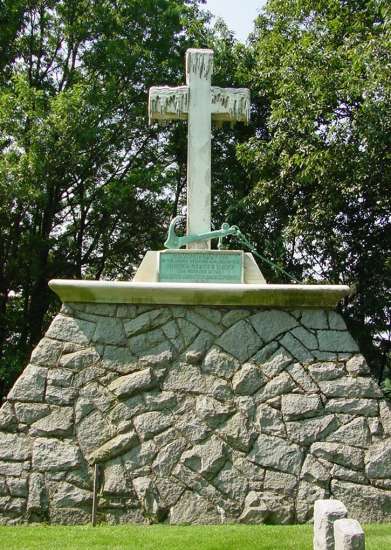 The Jeannette Monument is the largest monument in the United States Naval Academy Cemetery. It memorializes the 1881 loss of while exploring the Arctic ice. Jeannette, with a crew of 33, collapsed and sank under surging ice in the summer of 1881. Her crew, commanded by George W. DeLong, took to the ice dragging three small boats. When open water was found, the boats were used to sail to the Lena Delta of Siberia, 700 miles distant. DeLong commanded a boat of 14 total crew members, Executive Officer Charles W. Chipp's boat's crew was 8 total crew members, and Engineer Officer George W. Melville's boat had 11. Chipp's boat was lost at sea with all hands. Engineer Melville's boat landed in the southern delta, and DeLong's boat came ashore farther to the north on 17 September 1881. Melville quickly found aid, as did the two hardiest sailors of DeLong's crew soon after. The 12 remaining, including DeLong, perished from starvation or exposure. Thus 20 of the original 33 did not survive the expedition.

Be the first to add a review to the Jeannette Monument.