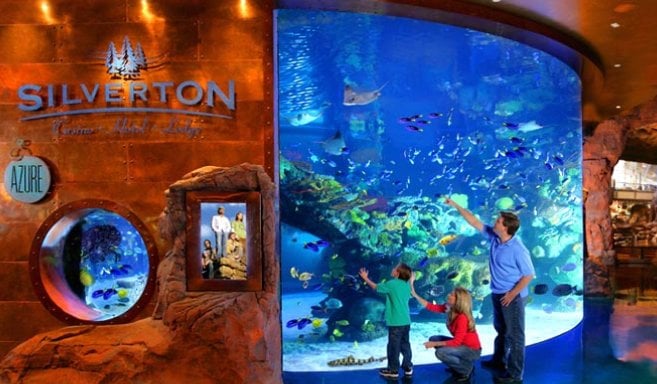 Silverton Las Vegas is a 300-room hotel and casino in Enterprise, Nevada, near the southern end of the Las Vegas Valley. Located on an 80acre site, the hotel's market is California tourists and locals. The 64701sqft casino is set on a rustic lodge and water motif. It is owned and operated by Ed Roski.HistoryEd Roski's company, Majestic Realty Co., purchased an 80-acre parcel of land along Interstate 15 in 1989, intending to build an industrial warehouse.On July 8, 1993, Boomtown, Inc. and Roski announced a joint venture to open Boomtown Blue Diamond. The $70-million facility would be constructed by Roski, with financing from Boomtown.Boomtown Las Vegas opened on May 27, 1994. A month later, Boomtown, Inc. exercised an option to buy out Roski's 50% share of the property's operating company.The casino struggled to draw visitors, earning annual cash flow of less than $10 million. With Boomtown, Inc. set to be acquired by Hollywood Park, Inc., an agreement was reached on August 12, 1996 for Roski to buy the property's operating company, in exchange for $8.5 million in promissory notes, $2.1 million in cash and a release from the property's lease. The sale was completed on July 1, 1997, the day after the Hollywood Park-Boomtown merger was completed.

Reviewed by
Jennifer B.

It's one of those things that happen when you go to Vegas on a whim with (sorta) no solid plans at all. Came through to visit cuzzos "just because" and for whatever reason, we ended up here. One... Read more

The current artwork and artist they have on display right now is so talented! I highly recommend checking this out. It's located right next to the fish tank/mermaid show in the hotel, right in... Read more

Easily the best locals type casino in Vegas. The casino is laid out well with plenty of the most current machines along with many longtime favorites and a section of older "grinders". The 3 casino... Read more