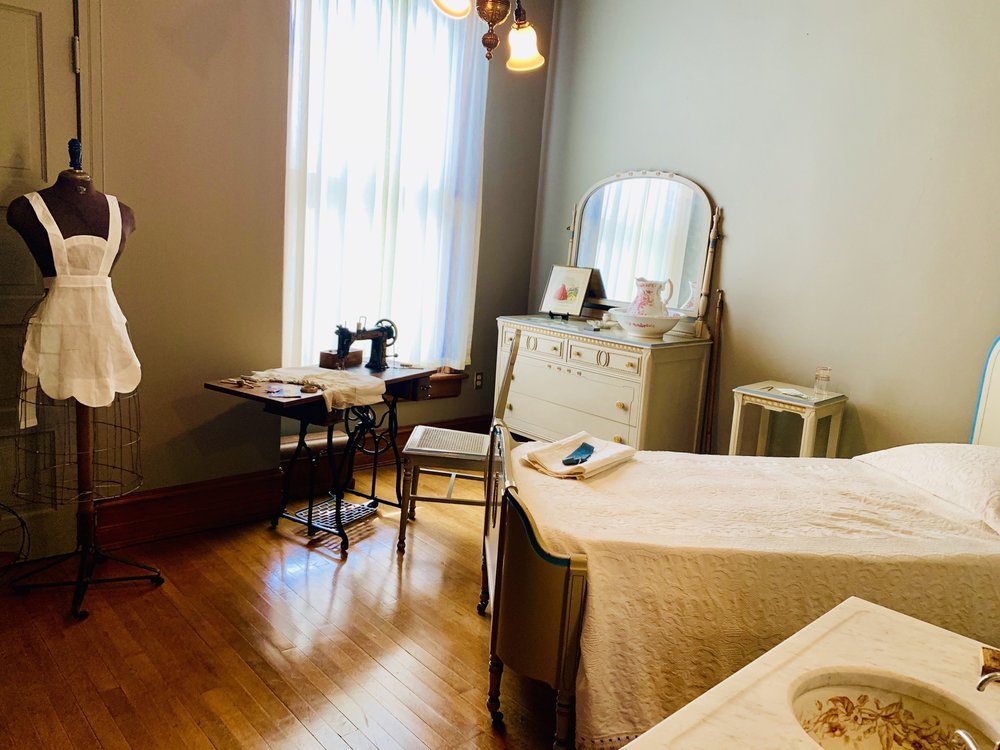 “A tribute to Black Hills pioneers”

The Adams Museum’s leadership in historic preservation led naturally to its involvement in restoring the Victorian home of two of Deadwood’s founding families, including the Adams Museum’s founder W.E. Adams. Built in 1892, the Queen Anne-style home with its oak interiors, hand-painted canvas wall coverings, stained glass windows, thoroughly modern 19th century plumbing, electricity and telephone service and original furnishings sat silent for almost 60 years after W.E. Adams’ death in 1934, when his second wife Mary Adams closed the doors. Mrs. Adams left everything intact from the sheet music in the piano bench, the books in the library, the china in the pantry, to the patent medicines in the bathroom, the gilded settee in the parlor and even the cookies in a cookie jar. The home was purchased by the Deadwood Historic Preservation Commission in 1992. The Adams Museum entered into a partnership with the City of Deadwood in 1998 to restore the home as a house museum. Matching funds from the Adams-Mastrovich Family Foundation and the Deadwood Historic Preservation Commission allowed the AM&H to bring in the leading experts in historic preservation to restore and interpret the home. In 1999, the Adams Museum incorporated in South Dakota as the Adams Museum & House, Inc. so as to appropriately assume the role of a non-profit organization operating two museums. One year later, the restored Historic Adams House opened to the public on July 1, 2000. The Historic Adams House property includes the Mary Adams Orientation Center featuring wheelchair-accessible bathrooms, orientation exhibition and a gift shop with a complete inventory of Victorian and Art Deco Era-styled jewelry, accessories and more. The Historic Adams House itself is wheelchair-accessible on the first floor.

Built by prominent Deadwood businessman Harris and Anna Franklin in 1892, the Queen Ann-style home boasted plumbing, electricity, telephone service and an indoor kitchen with an icebox. At a cost... Read more

This tour of a Queen Ann Victorian home was really great. The original owner of the house was a very prominent man in Deadwood as the co-owner of the grocery store. The house was very... Read more

Took a 45 minute tour given by a knowledgeable guide ($10 pp). The Queen Anne style Victorian home has an interesting history and is furnished with beautiful historically correct furnishings from... Read more