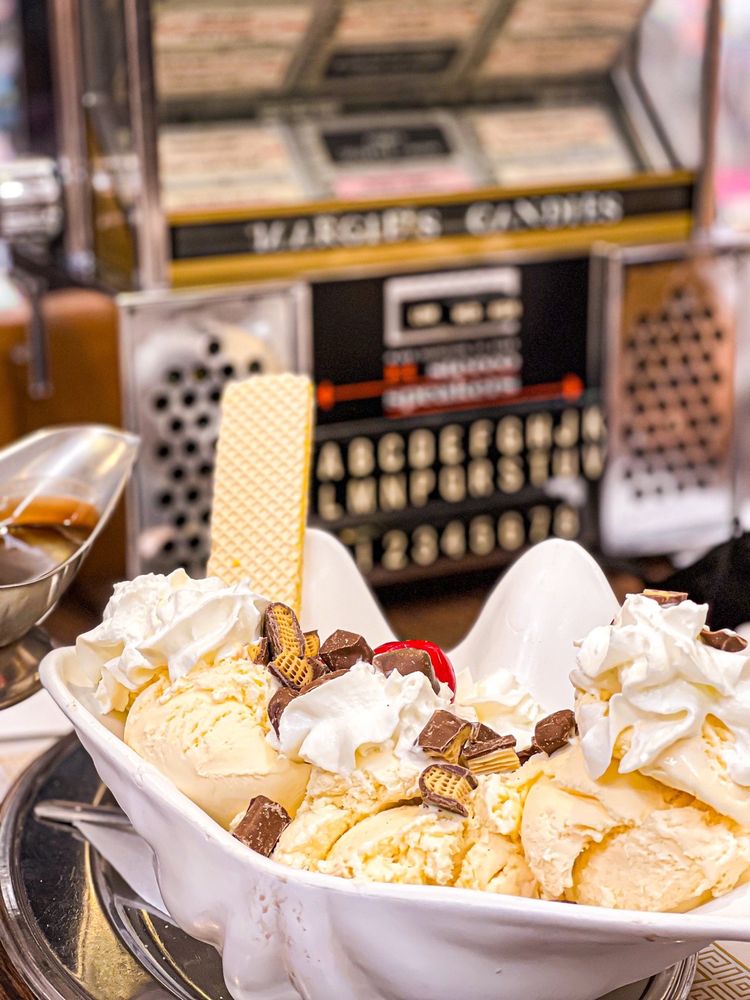 Three scoops of ice cream. Whipped cream. Nuts. And a river of rich, bittersweet hot fudge. To many, that's heaven in a white clamshell dish. A venerable Chicago institution known far and wide, Margie's Candies has delighted young and old with our homemade sundaes, shakes and hand-dipped candies for more than 90 years.  Our love story with everything sweet and decadent began in 1921, when Peter George Poulos opened an ice cream parlor on the North Side. The shop became known as Margie's Candies in 1933, when Poulos' son George Peter Poulos married his sweetheart, Margie Michaels.  Their son Peter George, our current owner, was born in 1936 and grew up in the store — literally. His father created a cradle in back of the candy case to hold the young one.  Peter George learned the fine art of candy making from his grandfather and started working at the shop "when I was old enough to be seen." He has been here for more than 60 years. His teenage son George, "a great fudge maker," is the fourth generation to learn the intricacies of the business, and the plan is for young George to take over the helm someday.       Musical legends, Hollywood greats and sports stars — and even famous gangster Al Capone — have found sweet release at Margie's Candies. The Beatles dropped by with dates after performing at Comiskey Park. Years later, a group of men in long black coats walked in and requested the booth where the Fab Four had sat. The waitress was a little leery of the men, but they proved sincere. Turns out they were the Rolling Stones.  The secret is out. Our third-generation owner Peter George Poulos knows it well: "You have never tasted paradise until you have eaten ice cream when it's first made."

A small retro diner themed creamery and sweets shop with a cute charm. They have many ice cream options like sundaes and banana splits, and even milkshakes! You can even bring home some of their... Read more

Reviewed by
Omar A.

102 years of business says it all. This is a great piece of Chicago and clearly one of the best candy stores in the city. Bring the kids. Bring grandma. enjoy a trip on memory lane. The... Read more

This place was so cool. It's full of different kinds of sweets. If you love sweets, come to this location and try their shop. One of my favorites was their Fudge Banana Split. It has a base of... Read more