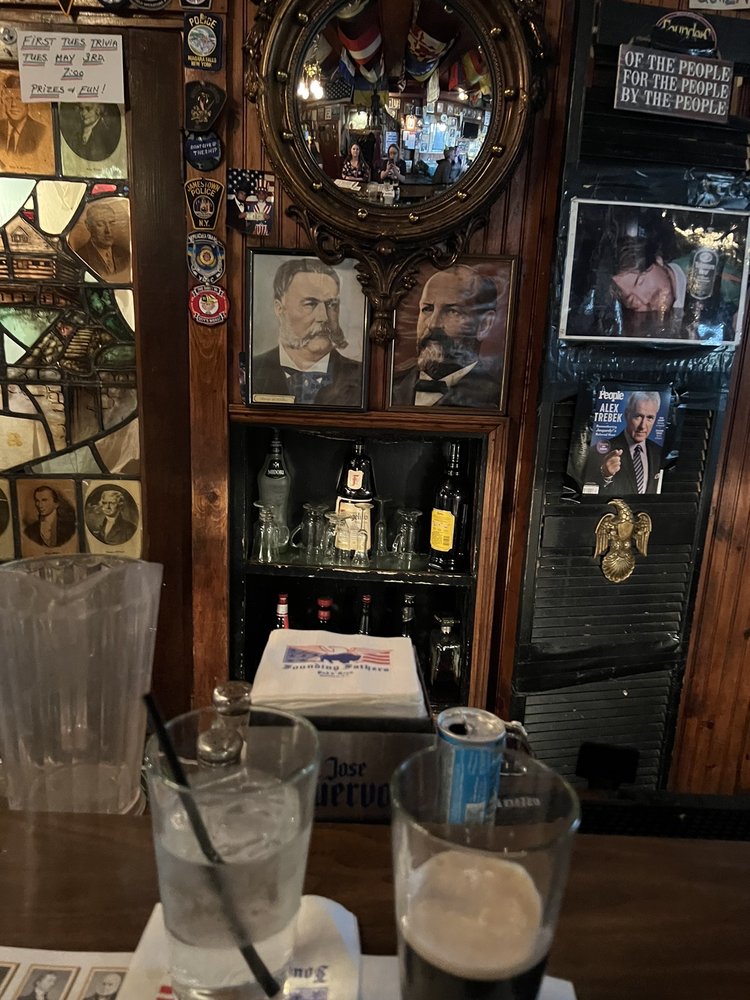 “Drink with the US Presidents”

One step off Edward St. and you'll find yourself relaxing in the company of America's most prominent forefathers, all while eating free nachos and watching football or participating in the owner’s masterful “trivia” exercises. It's Founding Fathers Pub, tucked away in a slim brick building off Delaware Ave in the historic Allen Town neighborhood and housing a bar that's one part gentlemen's drinking hole and one part traditional pub.  Everywhere in Founding Fathers you can find homage to American history. Whether its portraits of presidents (Our Founding Fathers), newspaper clippings of important events or flags that celebrating old election slogans or memorable places. The building itself dates back to 1874, when it was a livery, and upon closer inspection you can find old hitching posts still nailed to the brick wall.  Sitting at the bar you can keep company with the bartender and owner Michael Driscoll. Michael serves out almost as many facts about American history as he does drinks, something that makes a night in his pub an enjoyably social experience. Whether you're a regular or a stopping in for the first time, it's quickly apparent that you've walked into a bar where you're welcomed.  Aside from its historical charm, Founding Fathers has fantastic service and an impeccably clean bar.  Founding Father Pub keeps their patrons stapled to their seats with free popcorn and nachos. If you're looking to order food, the famouse grilled bologna sandwich will leave you wondering why you left bologna sandwiches in grade school.

One of my favorite watering holes. I'm a bit partial since one of the bartenders is also a dear friend of mine. But you'll find a unique interior with friendly staff, patrons, and the occasional... Read more

We had an awesome time at the Founding Fathers Pub. This is the second oldest bar in Buffalo. The owner, Mike, is a former high school history teacher and a wealth of knowledge. He asks trivia... Read more

I came here a few times in my college days. The place is small, grimy and salty. There is ton of American history to be found here. This was overall my favorite bar in Buffalo. I wish I was... Read more