This Victorian-era clothing exhibit is to die for. Literally.

Not all that long ago, pretty much everything could kill us. It wasn’t uncommon for loads of high society Victorian peeps to drop like flies, courtesy of the weirdest way to kick the bucket ever… deadly clothing.

Toronto’s Bata Shoe Museum is currently hosting one of the coolest (if not the only) death-and-clothing related exhibits ever, entitled "Fashion Victims: The Pleasures and Perils of Dress in the 19th Century." The exhibition is made up of 90+ clothing items that have all… well, killed people.

In the days before proper testing, dyes were made out of things like picric acid, arsenic, and an array of other horrifyingly-toxic chemicals. When it was first created, mauve dyes were the biggest thing since sliced bread, and everyone wanted something dyed soft purple. Turns out that the synthetics were deadly, and the fashion forward paid the price.

Other offenders were exploding hair combs, flammable tulle that when ignited set groups of ballerinas on fire, and beaver-fur hats that contained mercury, coincidentally spawning the term “Mad as a Hatter.” But the worst of the worst was a dye used to create garments tinged emerald green...

Ladies and men all over the world were elated when a man by the name of Carl Wilhelm was able to actually create a color-fast green, a welcome departure from the blue and yellow dyes that were common to the period. Unfortunately, everyone found out that mixing arsenic and copper in order to hold the pigment was also insanely toxic, and in most cases, deadly. Who knew?

Bata Shoe Museum
If you’re looking for something fantastically weird to do, you’ve got quite some time to visit the Bata Shoe Museum in order to check out their massive collection of Victorian-era clothing made from all the exploding fabrics, poisonous dyes, and flammable crinoline you can handle.

Looking for other "fun for the whole familiy" museums? Check out these offbeat exhibits!

Get weird at the Museum of Questionable Medical Devices 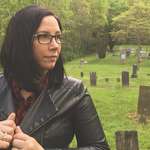 RoseClarkKrauss
Where and how do we sign up for this trip?
about 4 years ago This Victorian-era clothing exhibit is to die for. Literally.

Greg Newkirk Expert
Wow, what a great post!
about 5 years ago This Victorian-era clothing exhibit is to die for. Literally.

Tatiana Danger Road Warrior
Death by fashion!
about 5 years ago This Victorian-era clothing exhibit is to die for. Literally.

Anna Hider Blogger
I want to go to there.
about 5 years ago This Victorian-era clothing exhibit is to die for. Literally.
Remove Ads