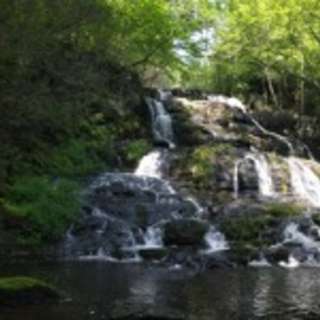 As of June 2019, this trail is still closed. Known to some locals as "Indian Ladders." Trail follows Hornbecks Creek. Once you've arrived at the first waterfall, the trail becomes a bit more narrow and rugged. The "ladder" is a sequence of waterfalls that follows. 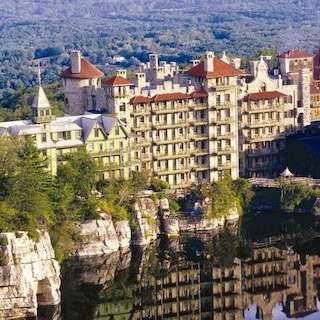 Went there for dinner and a hike and was turned away because they weren't allowing people in after 4:30. it was 4:39. Sunset wasn't until 8:17 — plenty of time for fast walkers and hungry adventurers. :(

They also charge $26 on the weekend to venture in: https://www.mohonk.com/a-day-at-mohonk/hiking/

It costs $21 PER PERSON to hike here:
https://www.mohonk.com/a-day-at-mohonk/hiking/

Hiking begins and ends at the parking lot at the Gatehouse, and we are a “carry in, carry out” facility. There is no shuttle or transportation provided.
Hiking is permitted during daylight hours, between dawn and dusk.
A hiking pass does not include access to the interior of the house or lake swimming.
Please bring your own food and water for your day of hiking. There is no food facility for hikers.
Pets are not allowed on our private property.
Hiking passes are not sold in advance. 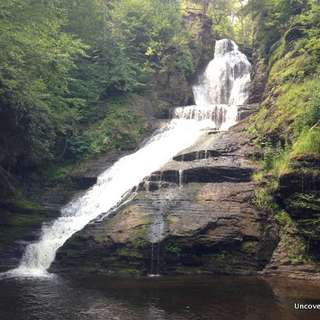 Easy boardwalk that passes by two beautiful waterfalls. Worth a stop. Not a hike, but a beautiful walk in the woods that’s accessible. There are stairs to the top which are completely optional.

Note: NPS says this is closed due to storms for the remainder of 2018. See this site for updates: https://www.nps.gov/dewa/planyourvisit/visitorcenters.htm 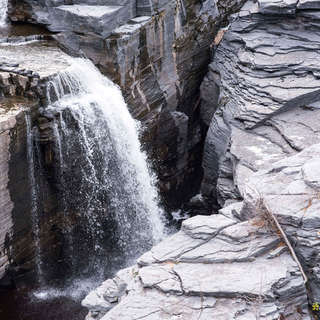 The Village of South Glens Falls & the City of Glens Falls invite you to visit COOPER’S CAVE on the Hudson River.

In 1825 after returning from exploring the Adirondacks and inspired by “these dark and silent caves” in the heart of the Hudson River, James Fenimore Cooper took pen in hand to write his most famous and beloved novel, The Last of the Mohicans.

Photo by Gina LeClair
Nestled under the Cooper’s Cave bridge, which connects the Village of South Glens Falls and the City of Glens Falls, sits a viewing platform adjacent to the cave, with information on James Fenimore Cooper; and the Mohican Tribe.

As you look into the site that offered protection to the characters in the tale, you can imaging how it inspired Cooper to write this classic American novel of love and adventure.

The Hudson River was called Muhheakunnuk or, “river that flows two ways” by the Mohicans for the tidal flow that forced salt water into the river causing it to stand still, and even reverse its flow.

Due to the mighty Hudson River, the region played a significant role as a major route by Native Americans, British and Colonial forces during the Revolutionary War. It is no wonder Cooper was inspired by the romance and natural beauty of the region.

As the industrial age dawned, the timber industry flourished and used the river to float millions of logs from the Adirondacks during the spring runoffs to this area. The advent of the paper industry in the latter part of the 1800’s and construction of dams to generate hydro power from the river established an important economic basis that exists today. The factories and power plants are still in use and can be seen as you gaze across the river from the over look.

After nearly two centuries, The Last of the Mohicans has been published in almost every language and is internationally known and beloved. And it is this novel, above all others, whose story has been most frequently retold to the world on film. Experience the setting of this American classic for yourself! 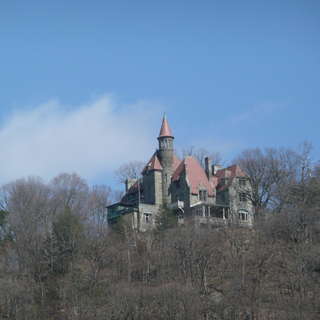 "The drive up to the property is a long, windy dirt road that snakes up the mountain, a perfect approach to such a unique place. Note the numerous KEEP OUT signs! This is still private property, and a caretaker living on the premises has had to call the police countless times."

Take your Kayak! Water is a beautiful color and begs for a paddle.

"Duke Farms serves as a model of environmental stewardship and inspires visitors to become informed stewards of the land. It is a place of education, enjoyment and research that enhances the environmental health of the region. Through the beauty of its natural setting, the diversity of its wildlife, and the scope and quality of its educational programs, demonstrations and research, Duke Farms inspires people to transform their approach to conservation and to start building a more sustainable future." http://www.dukefarms.org 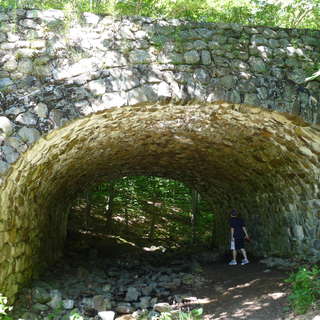