I love this place! The Cuba Cheese Museum does an excellent job of telling the storied past of cheese in Cuba. My great-grandpa actually makes a surprise appearance in some of their wall art, and I got to see the cheese waxing supplies that helped him become a man I always admired! It's fascinating to see this history and learn about how different our ancestors were. The cheese shop next store is also awesome, I've met some of my best friends there. 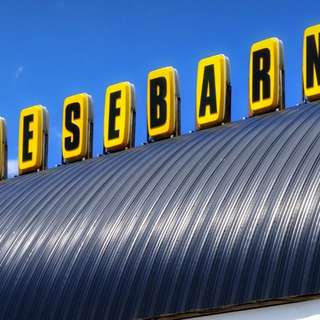 "Pull over." I demanded from my (at the time) boyfriend. He looked confused, and said no. "I see a sign for Grandpa's Cheesebarn," I explained patiently, "Pull over." He again refused, as we were already late. I grabbed the wheel and jerked the car off the exit towards that heavenly sign.

One near death experience and short breakup later, I was at *Grandpa's Cheesebarn*. I don't like to exaggerate, but it's safe to say that Grandpa's Cheesebarn is a little slice of Havarti Heaven on Earth. They sell local cheese, smoked cheese, cheese curds, Amish milk cheese - the cheese of your wildest imagination. This place gets packed with randos, but I'm perfectly comfortable throwing a few elbows to get to my cheese. They have a ton of free samples, but I ended up maxing out my credit card making sure I didn't miss anything. It was worth it.

Grandpa Yarman is Willy Wonka, and this place is the Chocolate Factory of cheese.