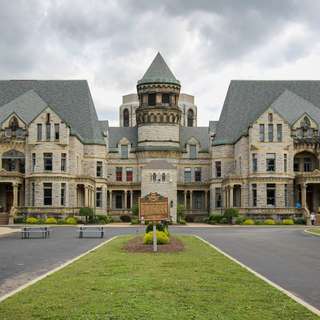 The reformatory is such an amazing building, the romanesque architectural style of medieval Europe is head on! Solid, sturdy and built to last. The facility was built in 1886 (with construction continuing through to 1910) and was opened on September 15, 1896 to its first 150 young inmates that were brought from Columbus (location of another state prison) by train.

The madness that occurred within the walls is truly disheartening. The prison was forced to close in December of 1999 via federal court due to being overcrowded and for inhumane conditions. Hundreds of unexplainable deaths have occurred here.

I've done multiple tours here and signed up to volunteer my time, the daytime history tour (guided) is very insightful but you need way more time than an hour to explore the entire building and to learn the history and facts. I've done overnight stays (No guide. Locked inside of the building with no lights. You're let loose to roam and explore freely.) I've attended the haunted house attraction (Not scary, overpriced and always get wrapped up with the beauty of the building rather than the haunted event). I also have memories of this place from the late 1980's while visiting incarcerated family members and it's still just as overwhelming and beautiful!

If you ever get the chance to roam freely be sure to find the THREE nooses in the attic, hidden behind dummy doors. The feelings that'll rush through you are priceless, after all ... we are human.

In 1995, the Mansfield Reformatory Preservation Society was formed. They have turned the prison into a museum and conduct tours to help fund rehabilitation projects and currently work to stabilize the building against further deterioration. The windows of the south side east cell block have been replaced, as well as all of the original stained glass windows that were in the building have been repaired and are currently being re-installed. Slow but steady!