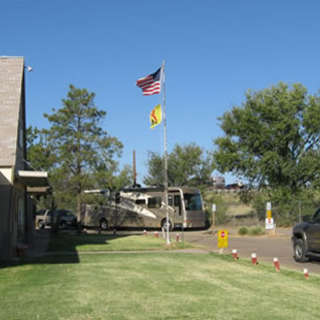 Warning to dog owners staying in Kabin 2, turn in the stained, microfiber sheets when you check out or you may be accused of stealing them.

We checked in on the night of Jan 3rd, left morning of Jan 4th on our way to Missouri on I-40. Campground owners called us in Amarillo and said they were missing the sheets that they have in the cabin to put on the cloth mattress covers before letting dogs on the bed. This is one fitted twin microfiber sheet that fits the bottom bunk, and a twin flat sheet with yellow stains that is supposed to go on the double bed but isn't big enough to tuck in around the mattress.

We were flabbergasted and told them the sheets were in the cabin when we left. They said their son had cleaned the cabin and said they weren't there, and he said the bottom bunk was "covered in dog hair". If they would have said the double, it would have been understandable because, as said, the sheet wasn't big enough to tuck in around the mattress. But we put the sheets on before we even brought the dogs into the cabin, so there was no way there was dog hair on the bottom bunk, at least not our dogs' hair.

The owners apparently didn't believe we hadn't taken their sheets and said we'd be invoiced for them. My husband, just to be polite, said "Well, if we find them when we get home we'll definitely send them back" and the owner said, "Oh, you'll find them".

The owner says "We won't be invoicing you". Well, GEE, ya think? Since we never took your sheets?? They offered NO APOLOGY.

So dog owners, be aware. Be sure to check for existing dog hair on the mattress cover (shouldn't these be taken off and laundered between customers?) and alert the owners if found, and be sure to take the dog sheets up and turn them in when you check out and get a receipt.

TL;DR - Owners accused us of stealing stained microfiber dog sheets, never apologized when they found sheets some hours later, take sheets to checkout to be sure you don't get the same treatment.