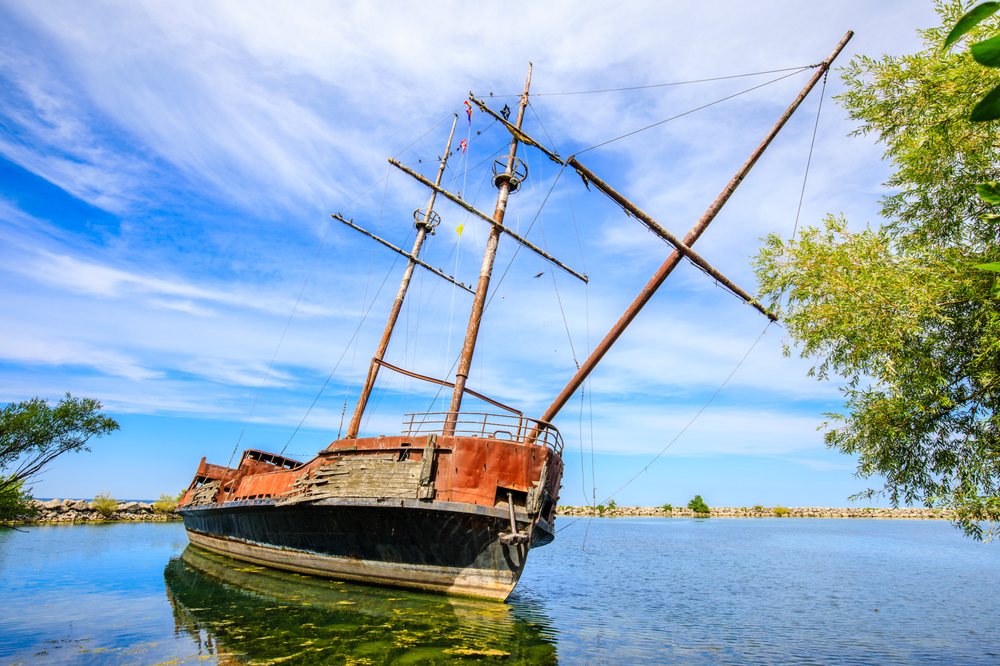 “one of the most recognizable landmarks along the Niagara”

This place is on private property. Listing for informational purposes only. Please do not visit without express permission from the land owner. La Grande Hermine" (The Big Weasel) is one of the most recognizable landmarks along the Niagara stretch of the Queen Elizabeth Way. The 140 foot ship was created as a replica of the largest of 3 ships French Explorer Jacques Cartier sailed up the St. Lawrence River. It was originally built in Quebec in 1914 and began its life as a ferry on the St. Lawrence and later became a cargo ship, a floating restaurant, and in 1991 converted to a replica ship. At one time the vessel was turned into a haunted pirate ship at Halloween to raise money for a hot lunch program for students. The derelict ship's final resting place is the Jordan Harbour just off the western shore of Lake Ontario, between the cities of Hamilton and St. Catharines. This abandoned shipwreck came to the Jordan Harbour in 1997, and was the victim of an arson fire in January of 2003, causing this piece of history to go up in smoke. What's left of the ship remains rusting, damaged and run down, but is still an interesting site to see. It was towed to the Jordan Harbour to await further relocation to a spot near Niagara Falls in hopes of turning it into a gambling venue, but the owner passed away before permission was received. This shipwreck has since been a distinctive landmark and favourite roadside attraction to many, and also referred to as 'the pirate ship' in Niagara. This little understood landmark tilts strongly to one side as it half sits and half floats, only a few metres off the shoreline in the small artificial cove of the Jordan Harbour.