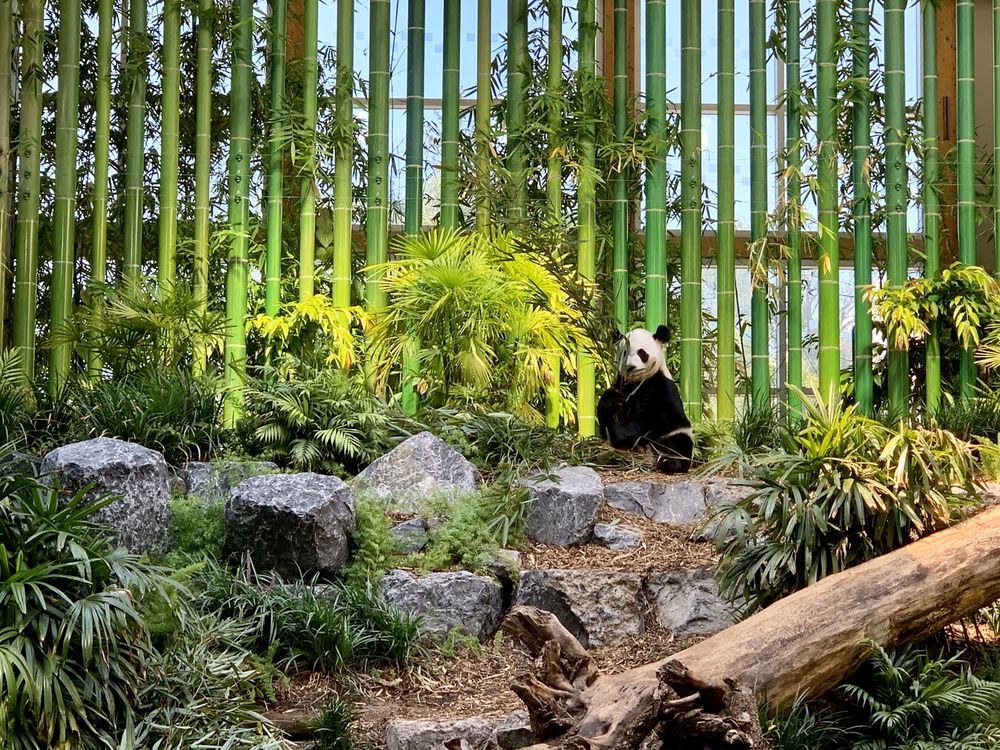 The Calgary Zoo is located in Bridgeland, Calgary, Alberta, Canada, just east of the city's downtown and adjacent to the Inglewood and East Village neighborhoods. It is accessible via Calgary's C-Train light rail system, by car via Memorial Drive, and by bicycle and footpath via the Bow River pathway. A large portion of the zoo is located on St. George's Island in the Bow River. The zoo is operated by the Calgary Zoological Society, an independent not-for-profit organization that is Alberta’s oldest registered charity. The AZA, WAZA, and CAZA accredited zoo was among the first in Canada to be accredited by all three associations. It is home to almost 800 animals, excluding individual fish and insects, and 130 different species. The 120-acre zoo is organized by into six distinct zones: Destination Africa, Canadian Wilds, Penguin Plunge, Dorothy Harvie Botanical Gardens and ENMAX Conservatory, Eurasia, and Prehistoric Park. The zoo is open every day except for Christmas Day. As Canada's most visited zoo, Calgary Zoo was in 2015 recognized by TripAdvisor with its Travellers' Choice Award. The zoo has also received international recognition as one of the top zoos in the world for conservation research. In 2013, the Association of Zoos and Aquariums said "the Calgary Zoo sets itself apart as one of the top zoos in the world." In 2015 the zoo was named one of the top three most respected organizations in Alberta and one of Alberta's 10 most beloved brands.

We head down to the Calgary Zoo nearly every summer and it never disappoints. It wasn't a super busy day when we were there which was nice. Bathrooms everywhere, helpful staff, lots of room to... Read more

This was a fantastic zoo to visit. The layout was very good with plenty of seating and shade during the visit. The enclosures looked fairly big for animals to roam. Unfortunately, a lot of the... Read more

My family of four kids aged 10 through 16 enjoyed this zoo. They all like animals - so that helps too - but we had a great day. Many of the animals were out and active when we went so that made it... Read more